A Little Bit of Home 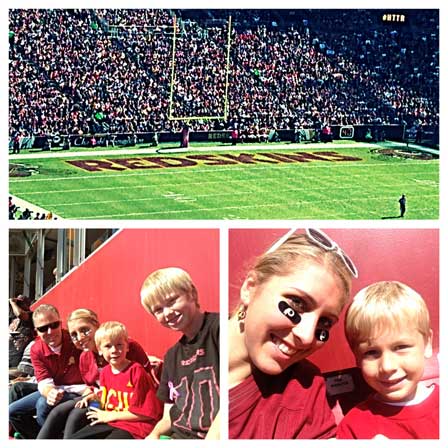 Sunday back in America means one thing…NFL football! Living in the DMV (DC/MD/VA) my entire life, I’ve always been a Washington Redskins fan.  Knowing that I wouldn’t get to watch Skins games this year didn’t sit too well with me. So I caved and got NFL game pass and it was one of the best purchases I’ve made!

On Sundays, my go-to outfit is a Redskins shirt. So this past Sunday, I was wearing one of my many Skins shirts and just going about my business like it was any other day, until I was walking out of a local café and a group of American tourists walking in my direction said, “Hey! Are you an American?” So naturally I said yes and the next words out of their mouth were “Go Redskins!” I was completely taken by surprise. We continued to talk for a little and they said they too were from the DC area and one of the ladies actually lives in Rockville, which is where I lived. What a small world! I think they were so surprised to run into another American, let alone a Washington Redskins fan, that they asked to take a picture of me with my Redskins shirt on. That was just the beginning of it though.  About an hour later, when I was walking through town, a man and his wife stop me and the first thing out of his mouth was, “That is the best shirt I’ve seen all day!” It turns out that they were from Annapolis and Redskins fans as well. Two Americans in Galway, Ireland who were Redskins fans…I couldn’t believe it!!

Never in my life would I think I would come across Washington Redskins fans here in Galway, let alone twice in one day! That night I started to think seeing them was good luck because the Skins went on to beat Jacksonville for their first win of the season. No matter how far away from home you may be, you never know when you might find a little piece of home. GO SKINS! HTTR!