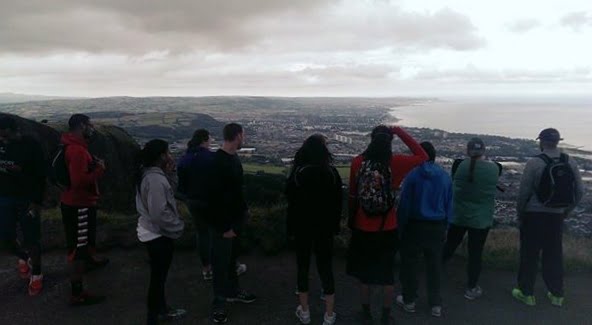 I have really been having one of the best times since I have arrived here in Ireland. I have met so many amazing and welcoming people everywhere that I have been this far. I got to coach and teach so many different kids at all the camps and this past weekend I got to coach the under 16 Carlow basketball team as well which was extremely exciting.

Besides working camps and coaching I also got the opportunity to explore some of Ireland. I got the chance to hike up Cavehill in Belfast. It had the most amazing view overlooking the city and was also able to see the land of Scotland across the water. Also while in Belfast, I got to see the Carrickfergus castle. After being in Belfast for a week, I traveled to Dublin where all of the scholars went on a nice walk in the city and got to see Trinity’s campus. While in Dublin, we got to coach and met the kids from Kubs Basketball Club which was grand. After the camp, Kelsey and I went off with our host family for the night. The family was very welcoming and I learned a lot about the Irish culture.  Their daughter Katie taught me some Irish slang words and showed Kelsey and I an incredible YouTube video that she was a part of which represented the Irish culture.

After working the camps in Dublin, I traveled to Clonmel/Tipperary for some more training with the other Scholars. When we arrived we got to go on a tour of the famous Coolmore Stables in Tipperary. During the tour I learn a variety of different things about breeding horses and how much work it is to take care of them. The most exciting part of the tour was seeing one their most successful horse, Galileo.

The past two weeks have been a real eye opening experience and I have been enjoying every minute of it. Next stop is Carlow!

Keep posted for my next blog of me arriving in Carlow!