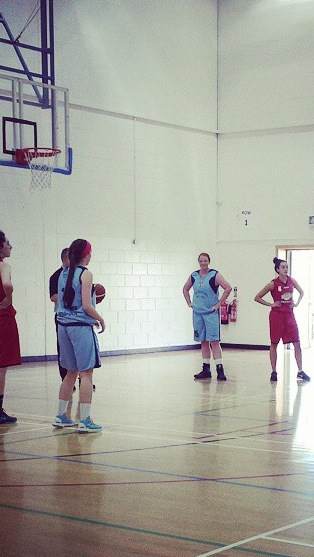 After sorting out our car issues on Saturday, we hit the road for a 2 plus hour journey to Carlow. This preseason tournament was split into two groups, one team in our group dropped so we only had two games to play. One game was against fellow Victory Scholar Jess! As anticipated, the rules and reffing are much different. I immediately was confused when girls were freely walking in and out of spots during foul shots. NCAA should know that the one touch “warning” before a reaching foul does not exist anywhere but college basketball. The physicality was on a whole new level, which I personally enjoyed. When we got into team fouls, two shots, not a one and one. The lane is also on a slant and in my opinion gives the offensive rebounder more of an advantage then the defensive. All these things were minor but still took some getting use to.

Our first game was extremely close. Back and forth with one minute to go we tied it up on foul shots. Then we made a mental mistake and fouled the other team on the sideline with about 3 seconds to go which resulted in them getting two free throws that they made. Tough loss, but definitely not a bad start for game one. Next we went to play Jess’s Carlow team, which we knew would be tougher. With only eight girls, fatigue also set in during game two. With another American on the court things just were that much tougher. Jess and I battled in the post, and Carlow was up by about 8 at half. We let the lead spread and ended up losing by close to 20. Carlow was a strong team but we once again learned a lot and picked certain things to focus on improving. I personally thought for having a total of 4/5 practices just once a week on a Monday night, the results weren’t bad. We have two games under our belt as we head into this coming Saturdays preseason tournament in Belfast at Queens College.