Go for a hike they said, it will be fun they said 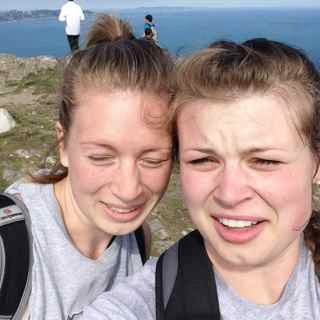 After basically hiking up Mount Everest, or what the people of Belfast like to call Cave Hill, I thought I would be mentally prepared for any other hike I would do this year. Obviously I was wrong. Katie and I decided to go to Bray Head and do the cliff walk.  I saw the “cliff” and thought it was nothing. Being too confident in my hiking skills, we started our hike and 5 minutes into it I was dripping with sweat, typical—peep the pic.

Thankfully, Katie and I had gotten sandwiches to eat once we reached the top, so of course that is what kept me going and it was definitely worth it! Somehow, the views you get on hikes cancel out the dreadful hiking part and make me want to do more. Weird how that happens. We were feeling ambitious so instead of just going down the way we came, we decided to continue along the cliffs. It was beautiful. Katie took a bunch of pictures, I got to do some handstands and embrace my inner gymnast, and we picked tons of wild blackberries that grow everywhere here in Ireland (shout out to Caroline, I can eat as many as I want fo free!).

We were walking along and seemed to lose view of the ocean. Seeing that it was a hike along the coast it was a wee bit strange (note my usage of the Northern Irish expression “wee bit”, I learn so fast).  Then we got to an area that was marked DO NOT ENTER, MOVIE SET. Embracing our Ganser genes, we went on to investigate. We came across a stage, a mobile “dressing room” and an empty van. When I got home, I looked online and found that Ashford Studios is a production company in Wicklow. They have been filming the TV series ‘Vikings’ on Bray Head. I watched a few scenes, and let me tell you, it would have been hilarious if we had walked into a filming session. Here is the trailer. Just picture Katie and I walking into a battle scene with Vikings—I would have probably panicked and started punching people, even the trailer looks kind of creepy. I also left my Viking hat at home because it added too much weight to the suitcase, so they would have known immediately I wasn’t part of the cast.

Anyway, we kept walking down this supposed path having no idea where it would lead to. It was a scene straight out of P.S. I Love You, except we couldn’t seem to find Gerard Butler. Obviously I was really torn up about this so once we found the town we got the best Gelato ever and we were not even in Italy! Look out! Long blog short, we did go for a hike as they said, and it was fun as they said!