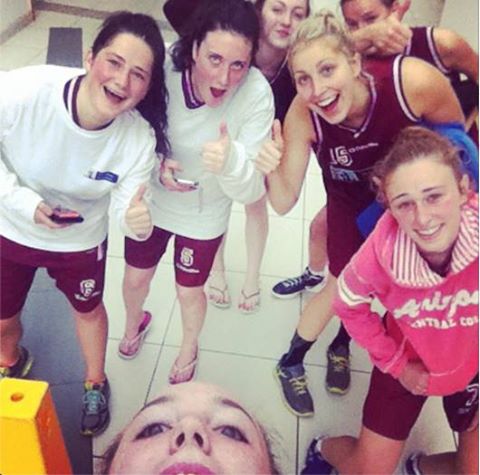 What a weekend! This past weekend my NUIG Mystics team and I travelled to Carlow for a National League Pre-Season Tournament. I knew it was going to be a long, tiring weekend, with three matches (better known as games in the States) on Saturday and possibly one or two on Sunday, but it was even more tiring than I expected. Nonetheless, it was so much fun and I wouldn’t have wanted it any different. The weekend brought back some great memories from my AAU days where we would play 3 or 4 matches in a day and it was always great fun, so I knew this weekend was going to be one to remember!!! Getting the chance to travel around Ireland, and play basketball all day with my friends and teammates…what could be better!

I was super excited to be on the court with my girls and play some games again. On Saturday, we played three matches, all of which were extremely competitive and close. We lost our first match against Oblates and fellow scholar Jen, but bounced back and won our next two matches against Killester and Portlaoise. We were all pumped to beat Killester because they had beaten us two weeks ago in the Dublin Tournament. Needless to say, it felt great to pay ‘em back! We ended up 2-1 on Saturday, and made it to the semi-finals on Sunday where we would play IT Carlow and fellow scholar Jess! Sunday’s matches were no different than Saturday…it was just as, if not more physical than Saturday. Our team stuck together though and fought for each other and came out on top and made it to the finals, where we would face Oblates, again. Unfortunately, we lost 66-70. Even though we didn’t get the result we wanted, I couldn’t be more proud of my team and our fight all weekend! Whether we were up or down, we never quit fighting or gave up and always had each others’ backs. We learned a lot from the games, our mistakes, and we learned a lot about each other. I had such a blast building team chemistry on and off the court, bonding with my team, and making memories that’ll last a lifetime. I can’t wait till our next set of games! GO MYSTICS!