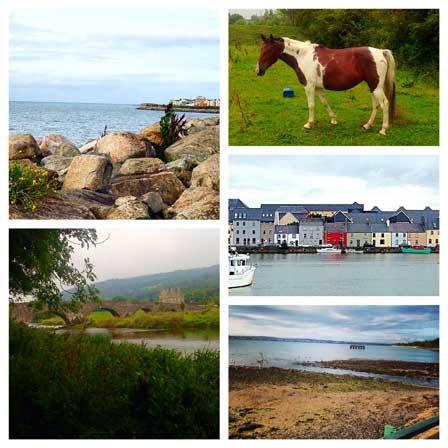 Ever since landing in Ireland, whether I was in Belfast, Dublin, Tipperary, or Galway, I tried making morning runs routine. I would go out for a morning run, (well sometimes its more like a jog) before the city gets super crowded with people. Trying to run around a new city I’ve never been to can be quite challenging, but it’s definitely helped me learn my way around town and experience Irish culture. I’m not going to lie, I have gotten lost a few times, but thankfully the people here are so friendly, so I’ve had no problem asking for directions and finding my way back, eventually. I have probably seen twice as much of the city just because of these runs. The amount of beautiful scenery and interesting sites I’ve seen is absolutely amazing! Whether it’s been running along the water in Belfast and seeing the Titanic cranes in the background, along the sea in Dublin, by the lake in Tipperary, or through the city and by the bay in Galway, I’ve been in absolute awe. Seeing castles, horses, lighthouses, bays, and beaches is the perfect way to start any morning! Never would I have dreamt of seeing sights like these on a daily basis. I’ve always heard Ireland was a beautiful country, but I never imagined it would be like this. I can now attest that when people say it’s beautiful in Ireland, it is and they aren’t kidding. Between all the green and beaches and stone, it’s incredible!! Unfortunately, its getting harder to partake in these calming and enjoying runs because I’ve started training, but hopefully I’ll still find some time every now and then.