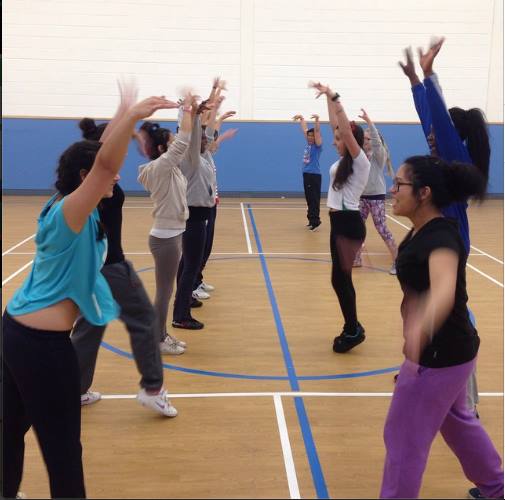 Each week I coach kids at a local girls school and week after week they just continue to amaze me! One day we were working on dribbling and ball handling and I had them doing some basic drills I’ve done since I was their age. Afterwards, I wanted to challenge them a little, so we started doing two-ball ball handling. One girl asked me, “Would I ever dribble two balls at once in a match?” I replied, “No, but practicing dribbling two balls helps with hand eye coordination, helps you get a feel for dribbling, and can help make dribbling 1 ball that much easier.” They all looked at me like I had 2 heads and didn’t really understand so I demonstrated for them—first with 2 balls, then with 1 ball. When I was doing two-balls they all started screaming and clapping—I’ve never heard so many “Wows” in my life. Honestly, I was completely surprised by their reaction. This is a drill I would do all the time in training and all I would hear is my coach and often times my dad yelling, “Faster, faster! Quick, quick!” So I have to say, hearing cheers instead of faster and quick was a nice, brief change.

During another one of their training sessions, we were working on defense so I had them doing a pretty common defense stance and reaction drill. Basically, they slap the floor, yell defense, and get into a defense stance, then on my commands they would slide left or right, do fast feet, take a charge, or dive on the floor for a loose ball. They were all really into it and enthusiastic, which was really awesome to see! I mean most coaches have to beg players to talk and be louder…so them doing it on their own was great. The next training session, I gave them the option of what drill to do and a few girls actually suggested this drill. I was completely shocked!! I actually asked the girls, “You mean the defense drill where you do fast feet, and slide and take charges??” And they were like, “YES!!” I couldn’t believe what I was hearing. Every team I’ve ever been on, we’ve done this drill and we all hated it. My teammates and I would dread it. And it was ironic because two days later at my Mystics training, we did this drill and lets just say it was by far our least favorite drill! It’s really cool to see how these young girls, some who never had played basketball before, have really embraced all aspects of the game and have so much enthusiasm for the game. 🙂