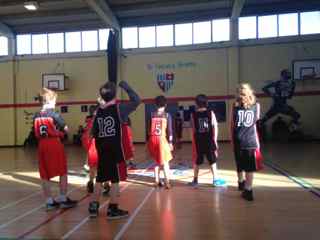 I have coached many different teams with many different players, yet there is something about the U12 boys I am coaching at Kubs that is different. And no it’s not their accents or their should I say “Irish” sense of humor but their ability to put all cares aside when it comes to winning a basketball game. We have had about 4 practices with different kids each week so I was a bit nervous going into the game. The opposing coach had a whiteboard and was calling and drawing up plays when I was on the other bench thinking to myself, “Playoffs? I just hope we can win a game.” (I hope some of you reading this know that quote because it’s hilarious). As the game went on things went well! We were up the entire game and despite our struggle to match up on defense, we did okay. I learned late in the second half that the boys had no idea what ‘match up’ means and no one cared to tell me. I must have looked very intelligent yelling it repeatedly the entire first half. So quick tip for anyone else coaching in Ireland they say ‘mark up’ here. We ended up winning by 2 after one of my players hit 2 clutch free tries (a la Bill Gibbons) after being fouled in the last 5 seconds.

I would say it was a pretty good coaching debut. The boys I am coaching have a lot of things going on at home and it is clear that when they come to Kubs they are looking to blow off steam. I have had to adjust my coaching style to ensure they get a good break yet are still productive and learn something. I am looking forward to continue working with them throughout the year to see their development as players and individuals. One thing I know for certain is that no matter what country you are coaching in, if you promise candy at the end of practice, they will be all eyes and ears the rest of the session. Anyway, we won our first game and I look forward to improving!