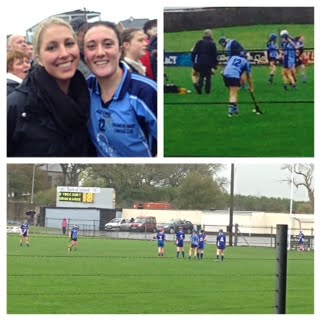 Camogie…? Before coming to Ireland I had never heard of it, let alone knew what it was. Luckily for me, now I know…It is essentially female hurling. My teammate, Ailish, plays Camogie for Oranmore and on Sunday, they were in the Intermediate County Finals so my teammate Hannah and I decided to go and watch. I am so glad I did!! While, yes it was kind of cold and rainy outside, it was so much fun. I was able to learn what the game was about and how it’s actually played, well enough to understand what was going on; considering before the match, I had no idea what the scoring system was or how they were allowed to move the ball up and down the field. Sorry for the million and ten questions, Hannah : )

The game was so intense and exciting…you couldn’t ask for a better championship game. It was so much more physical and intense than I imagined. As a competitive player, it was great to see how into it both teams were and how every possession meant everything. The game requires an immense amount of teamwork and no matter what happened, they constantly fought and battled for each throughout the entire game! In the end, it doesn’t matter if you are playing on a pitch, on a court, or on a field, a team sport is a TEAM sport and you can’t do it without them! Ailish and her camogie teammates are a great reminder of team and the rewards that can come from it! It was absolutely thrilling when that final horn sounded to see Ailish and her teammates celebrating their County Championship 🙂 Congrats, Ailish!!!