Back on American Soil 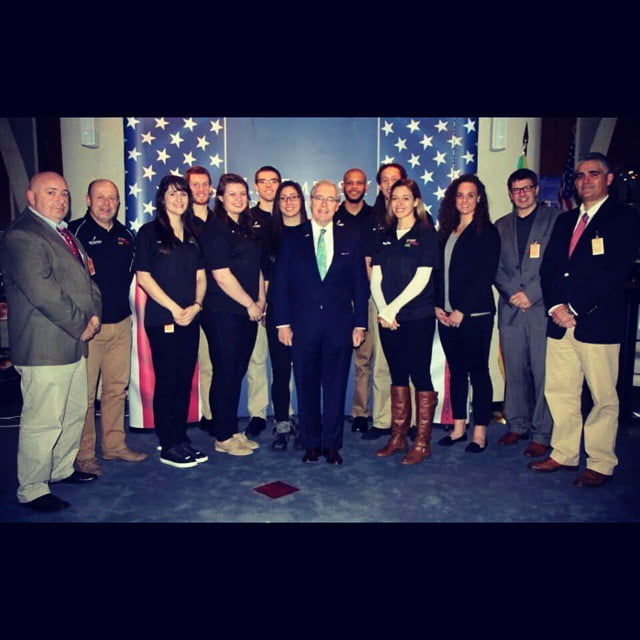 We were informed that we would be meeting with the US Ambassador, Kevin O’Malley, at the US Embassy in Dublin. Four of us loaded up in Gareth’s car, which resulted in Khalid, Ashley and I sitting snuggly shoulder to shoulder in the back. By snuggly, I mean there wasn’t actually enough space for us to all have our backs against the seat, thanks to the smaller cars they make everywhere outside of the USA.  The ride made standing up and getting out of the car feel that much better, no matter how tired I was after staying up until 3:45am (working on finance project) and getting picked up at 7am (waking up at 6:58).

There was some intense security to get through before getting into the Embassy, as expected, but it was great to get back onto American soil, even if for only a few hours. For a little while there, I was not the one with the foreign accent. We got to meet with some of the Ambassador’s staff before briefly meeting with the new US Ambassador, Kevin O’Malley, who has only been at this post for 2 months. He was very interested in the work we are doing and he is supposed to give his boss (Obama) our challenge to a game of basketball.

One of the Ambassador’s staff told us some awesome stories about her time with the State Department at her various posts in Israel and Pakistan, including a story that resembled the opening scene in Argo. She spent her time in Pakistan in Islamabad, which is the setting for the current season of Homeland. Overall, it was an awesome experience! It was a great opportunity to share our message and stories as we continue to grow and expand our reach in Ireland!