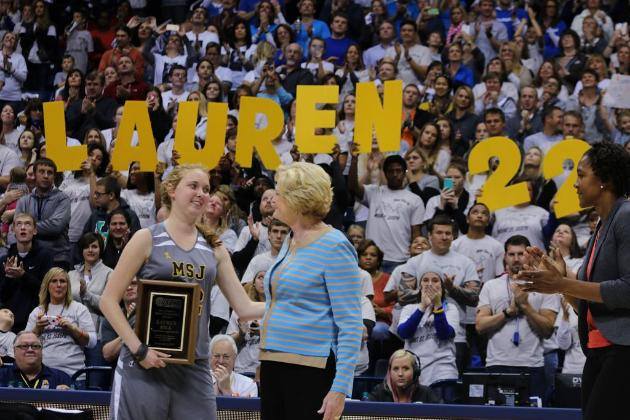 “Let’s not call it my last game. Let’s call it my first collegiate game.”

Those were the words of Lauren Hill as she played her first collegiate basketball game on Sunday in front of thousands of people at the sold out Xavier University arena. Lauren currently has an inoperable brain tumor from a rare cancer called DIPG, and raising awareness around the world for the rare disease. She was only diagnosed with the disease about a year ago, two months after she had committed to play collegiate basketball at Mount St. Joseph. She has a love and a passion for basketball like none other – and I had actually first heard about her story a couple months back as she was being honored during WNBA games. Her doctors now predict that she has months left to live, and her one wish is to play in a collegiate basketball game. Mount St. Joseph’s even asked the NCAA to move their first home game up a couple of weeks (to November 2nd) to make the wish come true: and the NCAA obliged!

I was so happy to have been able to watch her game this past Sunday on a livestream feed provided by numerous television stations. I don’t think I had a dry eye the entire game, especially when Lauren’s name was announced with the starting line up AND scored the first points of the game! It was great to see various sport legends supporting the game as well: from current and former WNBA players to THE PAT SUMMITT, who presented Lauren with an award at halftime.

Needless to say, Lauren is a source of inspiration for people to live their lives to the fullest and to pursue what they love. From hearing her parents and teammates interviewed, they all say that Lauren has a “never give up” attitude. For someone who has all the right in the world to give up – if she chooses not to, then why should anyone else? Her story will be with me forever, and I’m so thankful that I was able to watch and witness her first collegiate game this past weekend. If you haven’t heard of Lauren Hill’s story, check out the website http://www.1more4lauren.com.