‘People With Less, Have The Most To Give’ 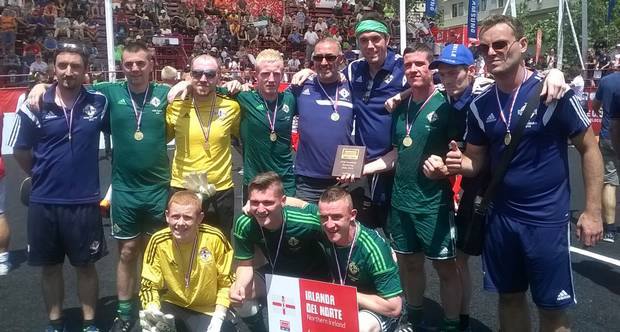 I have had so many family members ask me what it is I actually do. I even refrained from asking Gareth Maguire and Deirdre Brennan any more questions about the program before I landed because I wasn’t 100% sure exactly how it worked. However, if you ever need to see how it can change someone look no further than Brendan Kingsmore.

Brendan is a part of the West Belfast Ehoops program that meets every Wednesday night 7-9. This doesn’t even include the amount of hour’s mentors’ Marc Mulholland and Stephen Fox meet with the lads 1on1 in search of jobs, building relationships, and just their everyday personal life. Brendan was homeless for multiple years (9+) and he joined the Ehoops program and became one of the people that took full grasp of the concept behind ‘Sport Changes life’ mission.

Brendan was selected to captain Northern Ireland to the homeless World Cup games that were being held in Chile. Brendan and the Northern Ireland teams were successful in reaching and achieving their goal in bringing home the trophy. However, that wasn’t the most important thing to Brendan. Depending on who you are you either noticed the homeless part or the World Cup in the first sentence of the paragraph. If homeless stood out the most to you then you are probably someone who judge’s people based on their financial standing. If World Cup and captaining a country stood out to you then you probably can consider yourself someone who believes all people are the same. That’s who Brendan Kingsmore is.

While he was being interviewed or in contact with mentor Marc Mulholland he always seemed so humbled. He mentioned how sport, football (soccer), had been a scapegoat to forget about his troubles for a while and just kick the ball around ever since he was a wee kid. Then he always was wondering about his Ehoops that he was missing on Wednesday night so he could train. He wanted to show the lads that no matter the situation or the hand that you’re dealt you can make a difference. He cares for all of the lads in the West Belfast Ehoops program. That defines Sport Changes Life. When the group first comes together you can see the change from week 1 to week 24. From CEO Gareth Maguire to mentors Marc and Stephen they always talk so highly and appreciative of the lads. Then at the end of the program you can begin to see and feel how the lads begin to respect but more so accept the friendships built over these long weeks with the SCL staff. It builds leaders like Brendan and gives lads skills that help inspire them in a new direction in their own lives as well as in their community.

So what is Sport Changes Life you ask? It’s a family that cares about one another.