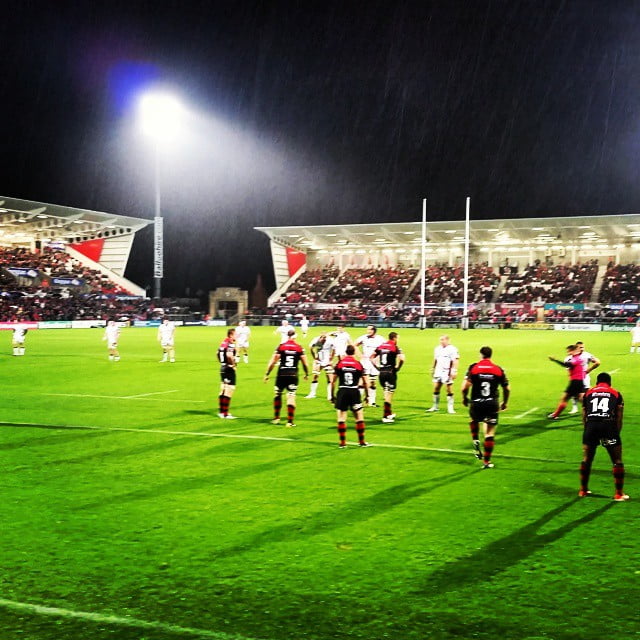 Basketball certainly isn’t as prominent here as it is at home, and I’ve found that in Northern Ireland, those that get involved with it make up a tight little community. Everyone who plays, coaches, refs, or enjoys basketball knows one another and seems to spend most of their time with others who share the same interest.

We’ve certainly been accepted into it with open arms as Victory Scholars, but its meant that most of our exposure to sport here so far has been limited to basketball. I had heard things about the more traditional Irish sports like Gaelic football and rugby, but couldn’t say I’d ever watched a competition in real life.

Last week, four of us spent our Friday at Our Lady & St. Patrick’s School right outside Belfast. We were invited by a friend named Paddy, who teaches there. Paddy plays for the Belfast Star basketball team and also referees a lot of our women’s games.  We had a nice Q&A session with the students after coaching them in a basketball session, and when we were finished Paddy showed us out to the pitch where there was a girls Gaelic match just beginning.

Immediately I was shocked by the physicality. In America, we have football and lacrosse to satisfy our need for lawful barbaric violence, neither of which I enjoy watching. But even in those sports, there is significant padding involved and a great deal of break time. Women, in general, don’t play American football, and the female version of lacrosse is largely a very low-contact sport. Basically, there aren’t many opportunities in mainstream American sport for women to show that they’re kinda tough too.

For this reason, I immediately enjoyed GAA. The girls were not holding back and it was truly exciting to watch the non-stop action. Paddy and his colleague helped explain to us the rules as we watched, and we found ourselves cheering and getting really into it. Some of the girls on my basketball team told me they used to play GAA, and many of them have been whistled during games for their overly-physical screens and their blatant fouls, and now I understand why.

On Monday, we got free tickets to go watch the Ulster Rugby match with the Lisburn ehoops crew. It was great to see the guys outside of the usual setting and be able to just socialize with them. It was chilly and rainy and we were standing in the section that wasn’t under cover, but I did my best Irish-person impression and acted like the weather didn’t phase me. I’d also never been to a rugby match before, so I soaked it all in the best I could… (Literally.)

I think I got a hang of the rules and decided my favorite part is when they launch the guys up in the air to catch the ball like flying cheerleaders. The crowd was so into the game, and most of the time I would just join in on the cheers and chants because, yaknow, ‘fake it til ya make it.’ Can’t say I’d pay money to watch rugby in the future, as I still find it to be a little on the violent side for my tender heart, but I’m glad I gave it a shot.

I think I’ll stick to basketball and yoga for my own physical activities, but it is still on my bucket list to watch a men’s Gaelic match and at least one hurling match. While at Our Lady & St. Patrick’s School, Paddy showed me a 20second YouTube video of a hurling match and I was quite scarred, so now when I see guys on the train carrying their hurling equipment, I just want to ask them why they’re so angry. It’s all a part of the experience, however, and somewhere deep down inside, I’m loving every minute of it.