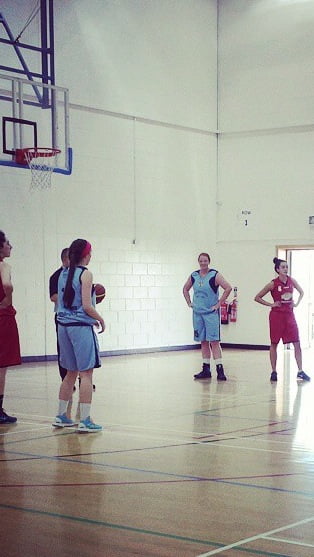 As the basketball season nears midpoint, there are just some differences I am still getting use to. Many were highlighted in our most recent Ulster University college game in Dublin against DCU, which we sadly lost by 3. The style of play allowed by the referees is probably the most difficult thing to get use to. Last year the NCAA implemented a rule on hand checking and reaching fouls, causing defense to become much cleaner. Ireland does not follow these rules.

Contact is drastically overlooked, but only sometimes! I do not think I have seen an over the back call once, so boxing out is a rarity. Wooden floors in gyms are also extremely rare to find, where as double rims are common which is not the standard in the states. Travelling and walking also have very varying meaning from referee to referee. Rolling on the floor with the ballis accepted if the player doesn’t attempt to stand up.

During foul shots, the defensive team gets three players on the hash marks, while the offensive team only gets two. In college you are also one hash mark higher, giving a better angle to box out, in my mind giving the defense an advantage for the rebound, but here defense lines up on the lowest hash mark making the angle worse. One of my least favorite accepted practices occurs during foul shots. Refs are not strict at all and players can freely walk in and out of their spots while the shooter has the ball and is shooting their free throws. In the states this would be a lane violation and the shooter would receive another shot if they missed.

Although all these things are minor, and basketball is basketball universally, playing one way in America for fifteen years does highlight the funny little differences!