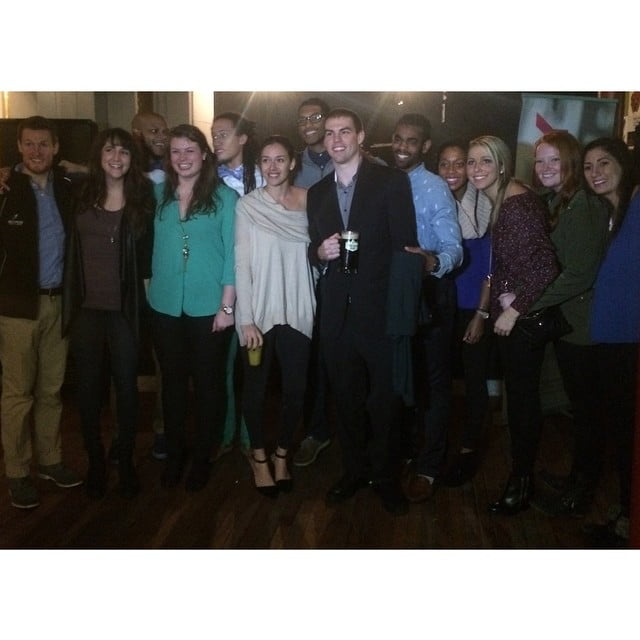 This Thanksgiving was certainly one to remember! It was the first in my life that wasn’t spent with my family back in America, and since it’s not really a holiday here, I didn’t expect much of a celebration. We were told there would be a dinner held at a club in town called Aether & Echo. My first visitor, Ryan, arrived on Wednesday and we decided to spend some time in the Christmas Market and then walk over to the club for dinner.

It was a beautiful night and it’s always fun to walk through city centre. Upon arriving, I saw all twelve of the other victory scholars talking in a big group. It was the first time all of us have been together again since the first week here in Ireland. Everyone looked so nice and it was great to be able to catch up with all of them and find out what their experiences have been at their respective universities.

Once upstairs, we were greeted by many of the SCL staff members as well as photographers and videographers. There was a raffle and a “hamper” to be won, as well as SCL decorations everywhere and even a live band. We had turkey, mashed potatoes, stuffing, macaroni & cheese, and vegetables for dinner. We were all given generous servings and were allowed to eat as much as we want, in true Thanksgiving style.

I was looking forward to dessert when I heard one of the staff members call for everyone’s attention. They had brought all of the Victory Scholars to an area in front of a TV and they said they had a surprise for us. Apparently, they had contacted our families back home and got them to make videos for us. I looked over to Ryan who told me he filmed the video of my family and edited it himself, and kept it a secret the whole time. I was the first one up, and I got to see my mom, dad, niece, and brother on the screen wishing me a happy thanksgiving and telling me how much they miss me.

Every year on Thanksgiving, my family seems to have some type of disaster, so my dad used my niece’s barbies to stage a reenactment of past Turkey-day mishaps, such as the oven door falling off and the turkey catching on fire. At the end, my brother is shown on the screen wishing me a happy thanksgiving and when my mom asks him if he has anything else he wants to say, he says no and leaves the room. I couldn’t stop laughing at the entire thing, and at the same time it was great to see my family in all their genuine weirdness wishing me a happy holiday.

It was definitely something I wasn’t expecting at all, and I’m grateful that SCL went to all the trouble to put it together for all of us. Some people were so touched they were even crying. It made the whole night feel a lot more intimate and it was also cool to see some of the people that my fellow scholars care so much about back home. I kinda feel like I met all their families.

After the videos, we had mini pumpkin pies for dessert, which were delicious, and we read off the winners to the raffle. We thanked everyone for the amazing night and then we hit the town to continue the celebration. I couldn’t be more thankful to SCL for organizing such a great event, and I can safely say this Thanksgiving was one for the books.