Trip to the American Embassy! 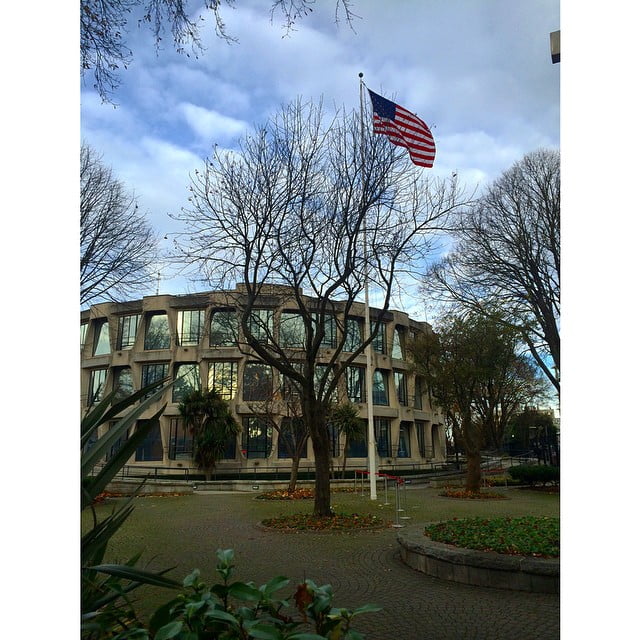 Last week our CEO Gareth picked us up from our accommodation at the University of Ulster and took us to Dublin to visit the American Embassy. I’d only been to Dublin once before this, and it was for a basketball game so all I really saw of the city was the inside of a gym. We departed bright and early from Belfast to make the trip down, which takes about two hours.

When we arrived, we had some extra time to walk around the streets a bit and sit down at a café. We weren’t there long before some of the other scholars from down South came in to join us. Jen and Christine from TCU, Caroline (who went to UUJ like me but now lives in Dublin), and Pat and Jess from Carlow. It’s been months since I’ve seen some of them so it was great to be reunited. We caught up on the walk over to the Embassy, and we wondered what our visit with the ambassador would be like.

As soon as we entered the embassy premises, we were asked to turn over our passports and backpacks and were told that no cameras were allowed. Once inside, we got the chance to sit down at a conference table and hear stories from the staff about what it’s like to work in an embassy. There were ‘chips ahoy’ on little plates as centerpieces, and it was one of those little touches that really made us all feel like we were actually in America.

One woman began to tell us stories about her experiences working at various embassies. She had actually studied abroad at TCU in Dublin and then took her internship at an embassy, where she eventually got her first job. She subsequently served two years at the embassy in Pakistan, which she volunteered for because she believed it was there that she’d be able to make the most difference.

Now that she’s back in Dublin, she can reflect on her experiences elsewhere, both good and bad, and she even plans to return to the more troubled countries soon. I wasn’t expecting to hear some of the things she talked about when it comes to working in an embassy, like how dangerous it can be at times, but I left completely inspired by her stories.

Not long into our conversation we were told that the ambassador was ready to see us. We took the elevator down to the main foyer and waited for his arrival. For someone that should probably be really intimidating, he was just a normal, nice guy. He joked with us about his boss, (Barrack Obama), being much more of a basketball fan than he is, and that he would see about getting the president to do a pick-up game with us.

We got a chance to talk to him about Sport Changes Life and what we are trying to do within the organization to make a difference in Ireland and Northern Ireland. We talked to him about our eHoops programs and the school visits that we make.  It was great to be able to share what we do with someone that has as much influence as he does, and see that he really believed in our cause as well. He told us that he really appreciates what we do and that the areas we work in really need our help, so it’s important that we are there.

Gareth told him that as Victory Scholars, we sometimes don’t realize the impact we have on the young people we work with. Caroline Stewart, who was a VS two years ago, agreed with him, and she said it took her a while to look back and realize how special she was to the kids she met. It made me think about my relationship with all of the young people I’ve been lucky enough to meet so far, and whether or not I’ve made a significant impact on them yet or not. The difficult part is they are making such a big impact on me, it is genuinely hard to see it the other way around.

The entire visit to the embassy got me thinking about a lot of things, but mostly that I’m proud to be involved with this organization and even though it was nice to be back on American soil for a little, there’s no where else I’d rather be right now than Northern Ireland.