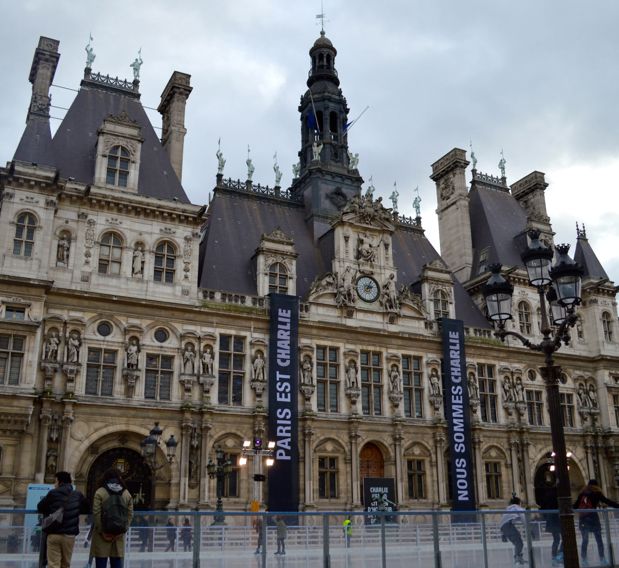 To start of the New Year, Ryan and I spent some time traveling around Europe. We stopped in Paris first, and it was quite late at night so I hadn’t planned on being able to do any site seeing, but on our ride from the airport to our hotel I caught my first glance of the Eiffel Tower. It happened to be during those few minutes every hour where they set the lights so it looks like it’s shimmering, and it was absolute magic!

As we were having lunch in a small cafe the next day, we noticed everyone was paying very close attention to a news broadcast on the TV. It was entirely in French, and after we left we had gone about our day quite obliviously, not really seeing any other signs of it. It seems as though there’s always some kind of sad/horrible story on the news nowadays, so I guess that’s why we thought nothing of it at first. That night, we started to get texts from friends and family at home making sure we were okay, and at that point we’d looked up what had happened.

Despite the horrific nature of the attack, there was a feeling of togetherness that overcame the city. It was an evil and cowardly act by terrorists, who would probably love for their actions to result in everyone living in fear. What I saw happen, however, was unity. All of the people of the city came together and found strength. Not 24 hours after the attack, there were huge banners on buildings, signs on the streets, and messages all over social media reading “Je Suis Charlie.” People from all over the world joined France to provide strength and pay tribute to those that they’d lost.

Our last few days there were obviously filled with the sound of police sirens and the visual of armed guards at every notable landmark, but the beauty of the city was not lost on me one bit. We ice skated on the Eiffel Tower, climbed to the top of Notre Dame Cathedral, spent hours in the Louvre, and “people-watched” over light meals from inside cafes. I was sad when it was time to go, but I know one day I’ll return to see all the things we missed this time around! We spent the next few days in sunny and warm Barcelona, where Ryan and I got to watch a match at Camp Nou and cycle around the city together, appreciating all the local architecture as we went. It felt good to spend a few days near the beach before landing in the 0 degree weather that awaited us in Dublin! The scholars there, Jen and Christine, let us stay the night at their place before heading back to Belfast in the morning to round out our travels.

Now that we’re back, I’ve had the time to do some proper research on what had happened in France and now I know that that was their biggest attack in decades.  Ryan and I both feel an intense admiration and respect for the citizens of Paris for their resilience and strength in the light of such a horrific circumstance. Although physically, we’re safely back in Belfast, many of our thoughts are still with Paris. Je Suis Charlie