Casual Friday afternoons with my friends… I mean eHoopers 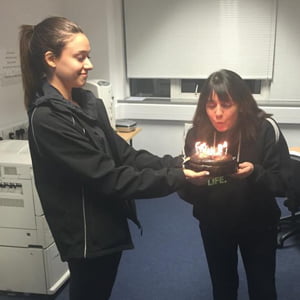 Since winter break ended, us Victory Scholars have settled back into our homes here on the Emerald Isle and gotten ready for the second half of our journey with Sport Changes Life. For us up here in Belfast, that has included the beginning of several new eHoops programs, and I am a part of five different eHoops per week now!

The way eHoops works is SCL takes a group of kids from different areas of Belfast and other Northern Irish communities and play sport for an hour, (this week we’ve done everything from yoga to badminton), and then we have a classroom hour. The classroom hour is used to have group discussions, learn about important topics or current events, or learn new skills. This past week our West Belfast group had a group discussion about depression and coping mechanisms, while our New Mossley group got a lesson in Photoshop using the “Mac Lab” at Ulster University. After the classroom session, everyone gets pizza and then hops on the bus to head back to their respective neighborhoods.

Our SCL staff meets with the kids outside of eHoops as well, organizing personal meetings either in the SCL offices or different places in the kids’ neighborhoods, to go over goals and aspirations as well as offer help in building a CV and finding a job. On Fridays, I usually join the staff members to meet our Short Strand eHoopers at St. Matthews, the go-to hangout spot in their neighborhood. I have lunch with the boys, play pool with them, and have conversations about anything and everything. It’s so odd to think that what I do with them is technically considered “work.”

This week I walked into city centre from St. Matthews to meet up with some friends. One of the eHoopers walked in with me and talked to me about how close the community is within the Short Strand. I knew it was a small Catholic enclave in East Belfast, which is primarily Protestant. Some of the kids I met there had told me about how the Strand was a common target during the Troubles, and I get the sense that its one of those areas in the city where the people have a strong sense of pride when it comes to their loyalties.

During the walk to town, he knew about every other person that passed us, and I remembered thinking he must be really popular. He explained, however, that anyone walking that direction down that specific road in town was probably heading towards the Strand, and it’s very uncommon that two people from the Strand wouldn’t know each other.

I think that the history here in Belfast is fascinating and I never get tired of learning from the people that live here from all of the different communities. Although it was just a short walk into town with a friend on a random Friday afternoon, it was an experience I never would have gotten if I weren’t a part of Sport Changes Life. I may have met them as “eHoopers”, but the way I see it, I just have friends from all over the city.