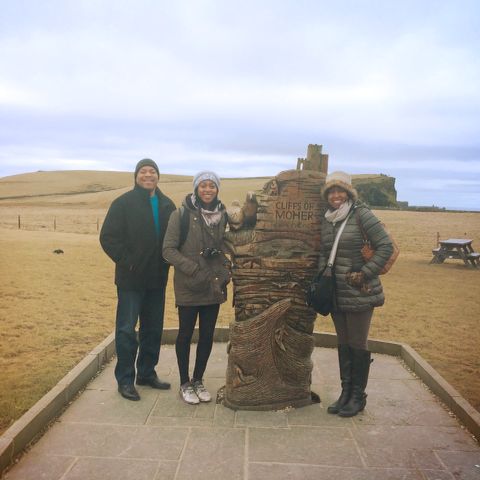 So yes, as you can guess from the title, my parents were here visiting this past week! They had an eventful first weekend in Ireland as their original flight was delayed.. which forced them to miss their connecting flight.. and switch their arrival airport into a completely different one. But of course it all worked out as they arrived in Dublin the same weekend that I had a Super League match also in Dublin (funny how that works!) Unfortunately, because of all the changes, the airlines temporarily “delayed” their bags, so they were introduced to a store called Penney’s at an early stage as soon as they arrived!

While in Dublin, we were on the full tourist track! Touring the Dublinia Viking Museum, Christ Church Cathedral, the Guinness Storehouse Factory, Dublin Castle, and Trinity College were the main highlights from the weekend. They also got to see my team and I play a great match against DCU, and just narrowly lose in the last minutes of the game. SuperBowl Sunday also turned out to be a blast in Dublin as we met up with fellow scholars Jen and Christine, as well as with another North Carolinian playing in the Men’s Super League – Preston Ross!

Back in Limerick for the week, we also stayed on the full tourist track as we also visited King John’s Castle and the Cliffs of Moher. One of my favorite moments was going to see the movie Selma on its first night’s release in Ireland. February is Black History Month back in the United States, and we normally do a family activity to celebrate the month – and this year was no different. My parents were also able to meet a lot of the parents who help run the UL Huskies Basketball Club, including some of the girls that I’ve helped coach throughout the past semester. I was happy they were able to get a well-rounded experience of their first trip to Ireland – from seeing the busier city of Dublin to the quieter side of Limerick, to meeting the parents and kids from the UL Huskies Club that I work with every week, to meeting my teammates and friends. I’d say that they had a fun-filled and welcoming week in Ireland, and can’t wait until I see them again later this year!