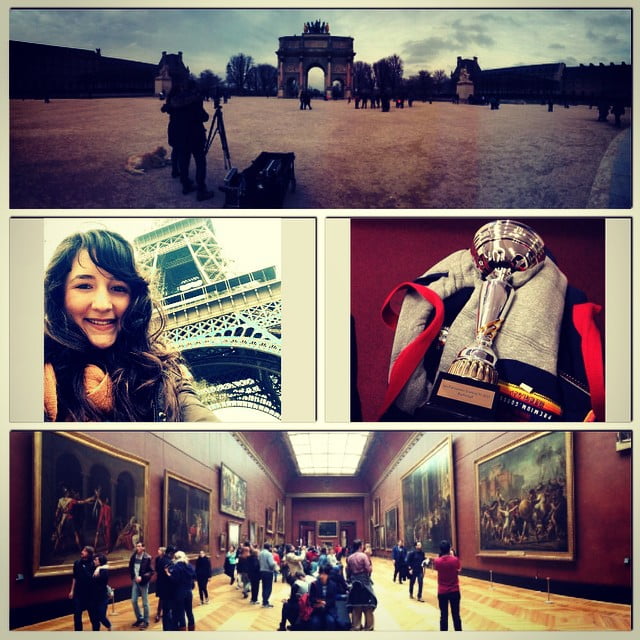 Who would have known that Trinity Basketball would be invited to a tournament in Paris?! Yes, I went to Paris. I still can’t believe it – we ate croissants every chance we got, toured, and played a bit of basketball!

In Paris, there is quite the elaborate public transport system that we were not terrible at (with the help of our French teammate, Chloe), but unfortunately still got lost the occasional 3x a day…ending up in the wrong city for our championship game…eventually making it to the gym and ended up winning the whole thing! With 10 minute half’s (15 minutes for the final game), and a three-point arc a step back from the free throw line, we managed to adapt quite well!

After playing on Saturday, the girl’s team went to see Notre Dame at night where a mass was going on. It was such a beautiful and peaceful place to come into after a hectic couple of days. We stopped to get dinner where I slightly forced the girls to order escagot (snails)! They were pretty good and we were all happy to have checked that one off the list!

I came a day later than the group due to class (such a dedicated student, I know), and wanted to stay an extra day, so Chloe invited me to stay at her house as she lives right outside of the city! I had dinner with her Mom, grandma, sisters, and brother where I attempted to put my 5+ years of French class to use, but apparently didn’t remember a single word of course.. The next day was my time to tour and enjoy the day in Pariii! I went to the Eiffel Tower and Musee du Louvre.

Chloe had helped me map out every metro stop and direction to help to get around, and finally I was off on my own! 🙂

It was a cloudy Monday morning so not many people were out – and so I walked up from the metro mentally preparing myself to see the Eiffel Tower. I turn a corner and there it is – I’d seen so many photos (and most importantly from Mary-Kate and Ashley’s Paris movie) of it is and couldn’t believe I was standing in front of it.

This whole 7 months away has given me so many amazing opportunities to do things, to meet great people, and be a part of so many meaningful events, games, and daily interactions. Having the chance to reflect today offered me a great deal of appreciation for all of what I have, and what more I can continue to give to others.

Needless to say, joining the Paris squad was ‘great craic’ getting to know the girls and guys teams better, playing some basketball and seeing the city!

So – Trinity Basketball continues for the league final on Wednesday morning!! Tune in Online for the early birds back home – 7:30am. You can find the link to watch on www.basketballireland.ie

Also – and very important to mention – as St. Patty’s Day is coming up, ALL the scholars will be coming to Dublin (oh gosh) as well as my Canisius College trainer AKA second mom, Erin!! CANNOT WAIT, and I think she may be a bit excited for the trip as well…She will be here for our League Playoff game for the Oblate Dynamos on Saturday the 14th!