Learning from the New Mossley Boys 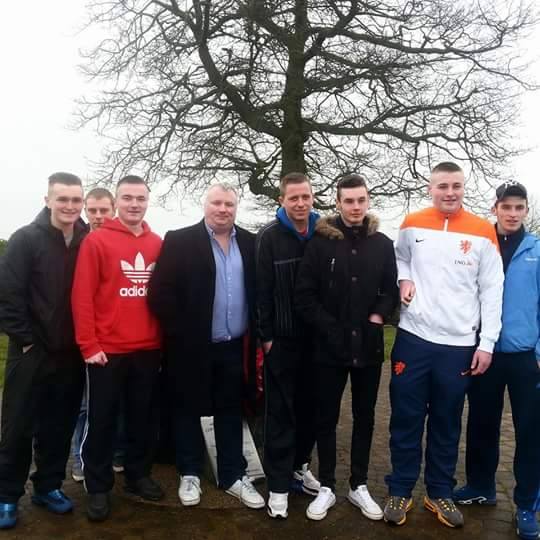 Every Tuesday night I spend two hours with some young men from New Mossley who have made the decision to take part in our Sport Changes LIfe eHoops program. Out of all the programs I am involved in per week, I’d have to say this group is one of the most “upbeat.” It feels like they all show up on 5-hour energy shots and even though I feel like I should have protective armor to play sports with any of them, I find it hilarious and extremely fun. This past week they’ve taught me a lot, both generally and specifically. I’ll get to the general sense later… but first, they taught me about one of their most controversial community traditions, building their annual bonfire.

It rises to be over twice the height of the surrounding houses, and it burns for about three months leading up to the 12th of July. The whole thing is illegal, but has been tradition in New Mossley and many other communities around Belfast for 400 some odd years.

The day after we briefly discussed it at eHoops, the boys took part in a filming of Stephen Nolan’s television show, which is one of the most widely viewed here in Northern Ireland. I was so impressed by the way they represented themselves on the show, speaking for their entire community on the topic and standing up for what they believe with eloquence and honesty. They spoke about the camaraderie and pride that comes from building the bonfires, as it’s one of the only things that has the power to bring the community together. Of course, burning tires, (especially in that amount) is quite terrible for the environment and the community does not come together to clean it up after it’s done burning, so it’s no wonder the whole thing causes some controversy. It’s fascinating nonetheless, and I’m grateful for the opportunity to learn about it first-hand, rather than seeing it on TV or reading about it somewhere from my home in America.

Now, for what they’ve taught me in a general sense.

We are nearing the end of the program with the New Mossley boys, and during the classroom session last week they offered to pay money out of their own pockets to keep the program going. All eHoopers know that the last few weeks include trips to fun places and a graduation dinner, so it’s usually an exciting time in the program. This group didn’t see it that way. Instead of discussing those fun events, they seemed surprised there were only four weeks left and were determined to find a way to keep it going.

I’ve expressed before how much I enjoy the process of getting to know the young people who take part in eHoops programs. While it’s easy to focus on the positive aspects of it all because they are so overwhelming, it wasn’t always sunshine and rainbows.

In the beginning I was discouraged by the fact that there were always some kids in each group who just could not be motivated to participate in any capacity.  In any given session, there would always be a few who would stand against the wall the whole time, not wanting to engage in either sport or classroom activities, and they weren’t particularly approachable either. When I thought maybe they just came for the pizza at the end, I would be confused again to find that a lot of times they weren’t even interested in that. What’s even more curious is that I noticed over time, their attendance each week would be more consistent than some of the other young people who came and seemed to have the time of their lives.

As the programs have progressed, I’ve made some important realizations. There are really all kinds of reasons these kids show up to eHoops, and sometimes it has nothing at all to do with the activities we set out for them. Now that I’ve been here almost six months, I’ve been able to build relationships with all of the kids that fit this behavior, and their actions don’t discourage me in the slightest anymore. I’ve come to realize that the kids who show up to eHoops really do appreciate the program, even if they have unique ways of showing it. The boys from New Mossley, however, made it loud and clear to us last week. It’s moments like that in which I realize the work I do here with Sport Changes Life is some of the most fulfilling I’ve ever taken on, and I’m happy that the young people I work with have been able to teach me so much in so many ways.