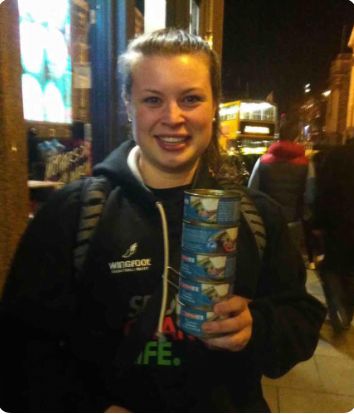 As some of you know lent started two weeks ago. That means it is the beginning of my 40-day candy detox. Being in Ireland I have become very fond of two types of candy: Tangfastics and Cadbury chocolate bars (and bonbons and Mars bars and Pinballs…to name a few).

My sisters and I have given up candy for the past 8 years so it was nothing new, but every year there is a different type of detox. Last year I ended up replacing candy with Cape Cod chips (shout out to my roommates of last year who got me addicted). Now I never mean to do this and my intentions are to endure the 40 days as a sacrifice to God, but what can I say…when you are up late writing papers it’s nice to have something to distract you.

I asked my boys at Kubs if they had given up anything for lent. A few had given up chocolate but the majority hadn’t given up anything. Taking this as an opportunity to improve my coaching and their behavior, I suggested we give up bouncing the basketballs when they are asked not to. Let me tell you, 12-year-old boys want nothing more than to bounce a ball, yet the first training session they agreed to give it up they did a lot better!

What I loved was that the boys were holding each other accountable and making sure they followed the new rule. Now, this may have only lasted 1 hour but I am finally seeing improvements in attitude and skill. I am most impressed by some of the boys stepping up as leaders on the team. You don’t really think about leadership among 12 year olds but it is starting to be very apparent.

They not only feel a responsibility toward myself, but toward each other. Although we have a long way to go, this is the first step in becoming a true team and it is just in time for our National Cup Semi-Final game!  Hopefully they continue to grow and develop and always remember the training they gave up “inappropriate ball bouncing” for lent.

Now before I end this blog I have to tell you quickly about when Katie and I bought tuna from Spar for #nomeat Fridays during lent. Initially, we went in to top up Katie’s leap card (aka bus pass for the Americans), but came out with 15 cans of tuna. It just happened to be on sale and we were stoked because lent had just started. Let me add that no one else would ever get as excited as us about a tuna sale, so we were crying laughing and could barely check out.

This led to us having to explain to the cashier what was so funny. Luckily, we got a chuckle out of him but managed to confirm our insanity. I’ll leave you (hopefully amused) with that.