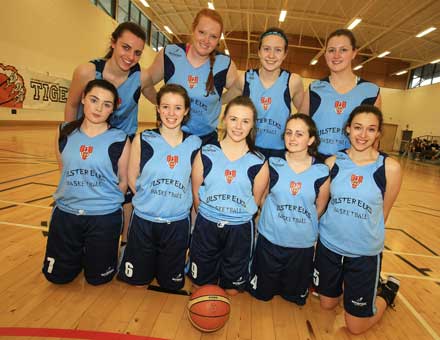 Finally, the tournament I’ve been hearing about all year has come to Belfast! Since I arrived, everyone I’ve met through the sport of basketball has brought up the annual event and described it as their equivalent to an “ESPN event” or AAU nationals.  Each year, Varsities moves to another city on the Emerald Isle, as last year it was hosted in Dublin, and the year before that in Limerick.  All of us Victory Scholars have been placed on the committee to help organize the event and I am quickly realizing that there is a good deal that goes into putting it all together.

There are two levels of competition, the A league and the B league, set to compete in games across three separate venues in and around Belfast. Since our women’s team at Ulster University won the B league tournament last year, we’ve been moved up to the A league this year, and we face some tough competition in teams that include our fellow scholars such as Kelsey, Christine, Jen, and Jess.

The tournament spans over a course of three days, and on the first day we had a game at 9AM. It was definitely the first time I’ve played that early since AAU, but I loved it. The facilities here at UUJ were buzzing with people and we actually had a nice amount of spectators at our game, which helped us all to wake up and play with a lot of energy. We came up just short after being ahead the whole game, but we returned later in the day for a good win over IT Carlow. The next day, we got to play Kelsey and the Limerick squad, and though we didn’t make it to the final, it was so much fun to watch Jen and Christine win it all with Trinity, and especially to see Christine accept the MVP award.

Each night of the tournament, all of the players, coaches, and even referees got together to blow of some steam at several clubs within Belfast. It was nice to be able to mingle with everyone and especially fun to listen to the variety of accents from athletes from all over Ireland. For those heavily invested in the basketball world here in Ireland, I can easily see why this tournament is something that is so anticipated each year and I’m grateful that I was able to be a part of it. Caroline and I decided, (now that we have friends in Galway) that we may even come back to take part in all the craic of next year’s Varsities as well.