Wearing DAVIDSON across my chest 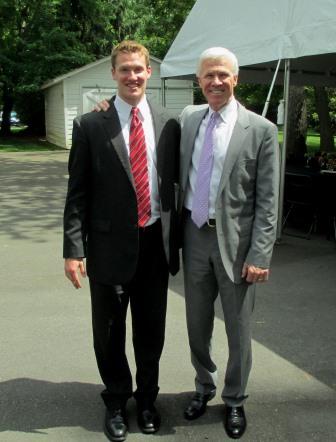 As Coach McKillop would say “You are not just part of a team, you are part of the Davidson Men’s Basketball program.” Truth resonates in this statement and it speaks volumes about the program, because it is not about the 15 guys on the roster any given year. It is about respecting the history and the people who have come before you and giving those to follow the same opportunity you were given. This program is also a family, and the people around you truly care.
Coach McKillop has had a massive impact on my life, whether it was a simple phone call during the toughest of times or a simple “I am keeping you and your family in my prayers.” I have learned so much from him on the court, as well as off the court! He gave me the incredible opportunity to join the Davidson Basketball family, first as a manager and then as a player.
There are two assistant coaches, who in particular I would like to thank as they helped make my dream a reality and have had a great impact on my life.
Matt McKillop was really the first member of the coaching staff that I met. Ironically, he is the one who kept my dream alive despite having to tell me twice that I was not going to make the team that year. Matt always gave me hope and would encourage me to continue to pursue my goal. It wasn’t always easy to continue to work towards something that neither of us knew would ever be possible, yet Matt never let me give up on it. I recall the day Matt asked me if I wanted to work out with him late at night before the gym closed. I saw this as Matt investing in me and believing that I still had a chance. Matt may have just wanted to get some of the rust off for his men’s league and he knew that I would be in the gym, but it meant much more than that.
Then there is Landry, who left after my sophomore year to take a job as Head Coach at Swarthmore College. Each year I work Landry’s camp at Swarthmore, and the summer before my senior year he said “You’re trying out, right?” He recognized that there was an open spot on the roster and seemed to expect me to go for it. Prior to this interaction, I was not sure if I was going to go for it, but I interpreted this rhetorical question as Landry believed I could earn a spot. After camp that day, I stayed after to get shots up and do sprints.
I have been blessed to be part of the Davidson Men’s Basketball Family! And I am lucky to thank the people who helped me achieve my dream of wear DAVIDSON on my chest.