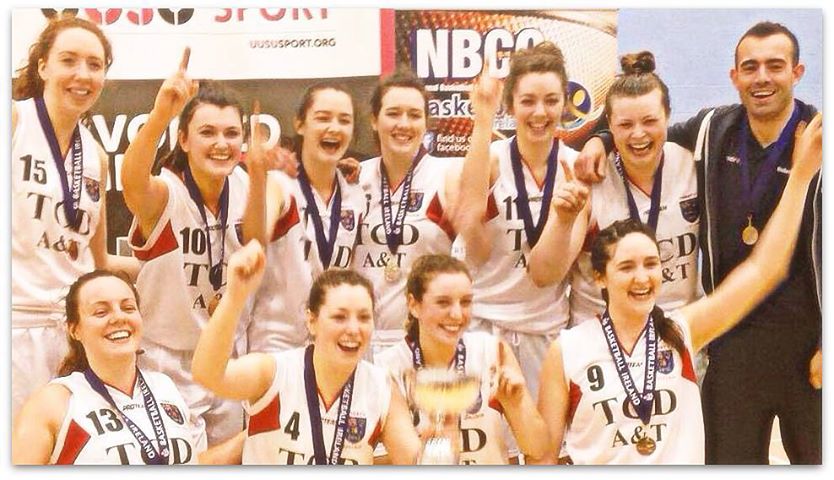 A few weekends after finishing up Dynamo’s basketball, Christine and I had ‘Varsities’ for Trinity. Varsities is a college basketball tournament, this year held in Belfast, where we competed against the other scholars attending the University of Limerick, Carlow, UUJ, and Galway as well as other colleges across the country.

It was the weekend we had been looking forward to all year long! Finally, we were all together again in Belfast where we started off 8 months ago in August for training. The weekend was a great get-away from the books as exams started the week after…ah!

We ended up playing 5 games in 3 days… No, I am not 13 playing AAU anymore, but yes, I managed to survive it – but only with the much-needed help from Chris in Sunday’s Championship! Man, we were struggling to shoot anything but an air ball. Literally. But then late in the game, Chris decided that it was her last game EVER and should pull out a few tricks! She went on to hit like five 3’s and we all were immediately kissing the ground she walked on…or actually it was up to a slow jog/trot at this point in the weekend…(#struggle).

The end of the game and her shots were unreal and I was so happy for her and the team. She got MVP and Trinity took home ‘The Cup’!!!

In terms of my basketball experience, Sport Changes Life and the Victory Scholarship has allowed me to have a great deal of fun playing some bball. Whether in my coaching, or on the floor myself, this new perspective on basketball I’ve gained has allowed me to learn and help others enjoy the game and with all that comes along with playing as much as I do.

We are all praying for VS, Nicole Krusen’s father who was in an accident while they were traveling in London. You can keep up with his progress via the link below: