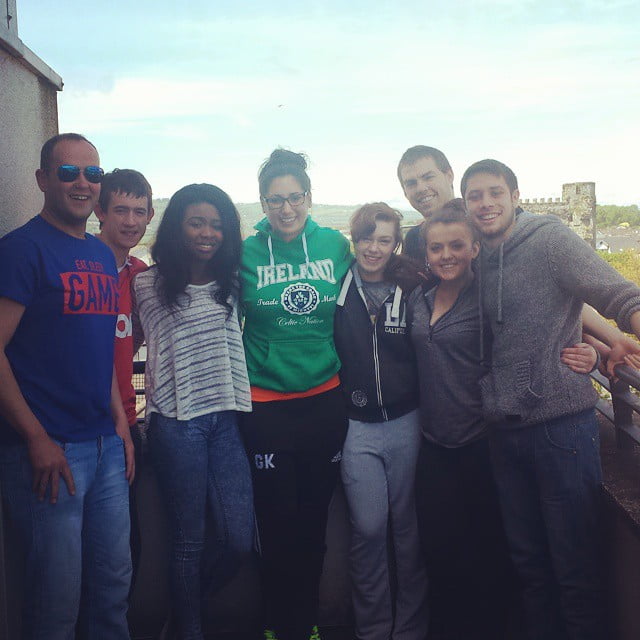 Now that I am finally done with exams, it is finally time to relax and enjoy the last few days that I have left here in Ireland! And there is no better way to do so then without my Carlow lads.

It feels like just yesterday that I was meeting everyone on basketball teams down in Carlow and just getting to know everyone. When I first arrived, pre season was full in swing and Kojack came to pick me up with Holli and Meg to take me to my first practice where I met the rest of the team. The first words I said when I got in the car was “I’m grand” which I got a little made fun of for since it sounded funny coming from an ‘American’ with a Philly accent. But these girls eventually became two of my close friends here along with numerous others.

That was just the beginning to numerous funny and entertaining times with all of the lads on the girls and guys team from team nights out, to roads trips and just random nights hangout at my apartment with everyone. And even enjoyed listening to Kiran beat boxing (my favorite person to take selfies with) Pat playing his guitar and singing and Rosalyn (my crazy best friend and Ms. Carlow) singing while me and Aly (favorite Irish-Philly girl) just sat there videotaping or dancing (fist pumping) to them three playing music. I also can’t leave out my favorite dance partner Jimmy (known for being the nicest guy around) who was by far the life of the party and always great company to have around. And of course my Berkely girls who always picking me up to take me on adventures around Ireland throughout the year.

I also became good friends with the International students who lived my apartment complex. There was a group of German students who I became really good friends with throughout the year. At first it was hard for them to understand me like many others but eventually the language barrier soon did not exist. It was interesting hangout with them since they would sometimes speak in English then in German which left me confused in conversation but Jacky and Annika were always there to fill me in the loop.

I have made some amazing and incredible friends this past year, with endless stories to tell. It was great being able to see the Berkley girls one last time and hangout last week with them. And I also had a wonderful night out with everyone in Carlow after exams were over. It has truly been an amazing year and wants to thank you all for making it that way! I have made some amazing friends and wish you all the best. I don’t like saying goodbye….so I’ll leave it at ‘until we meet again’…