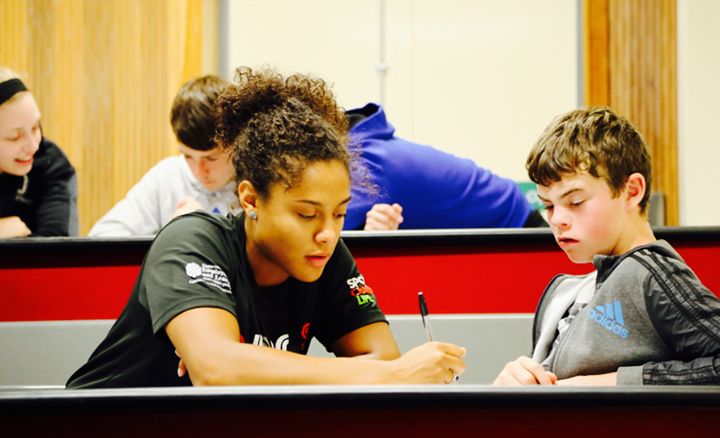 Starting my Ireland journey in Belfast was epic, not just because Ireland is one of the world’s most beautiful countries, but the aspects of coaching and developing friendships with the #SCL members contributed to the incredible week experience. Coaching this week was eye opening, despite the fact that I have coached younger kids in America before. I have probably learned more drills or tricks from the camp sessions in my one week in Ireland than I have gathered during my time as a basketball player. It is not because I don’t know basketball, but as players that have played the sport for so long and so competitively in America we easily forget the number one thing why we played the game in the first place: its supposed to be fun. Learning fun drills and incorporating them in to eHoops and the other camps brought the cutest smiles out of these kids’ faces as well as mine. Working with the young children in Belfast and building joyous relationships with these angels sparked something extremely important in my life as a basketball player that I have not had in a couple years, I was beginning to love the game again.

My coaching experience along with exploring the streets of the city and sharing these incredible moments with the Sport Changes Life family contributed to my week one unforgettable Belfast trip. Witnessing the Peace Wall and its beauty showed me that America is similar to Ireland in more ways than expected. Reading each piece of writing and artwork reminds me that we as people are never in a place to judge and should be able to speak freely about issues that matter. However, hiking Cavehill with the crew reinforced how blessed I am and how immaculate Ireland is looking down on Belfast. Now that the week is coming to an end, some of the scholars will not be able to join us next week in Dublin. Even though it has been only six days, I feel like I have known the Sport Changes Life family for forever and a tad heartbroken that I won’t see some of the scholars for a while.  As for Dublin and the scholars that can come here we come 😉