Religious Studies: A Lesson Outside the Classroom 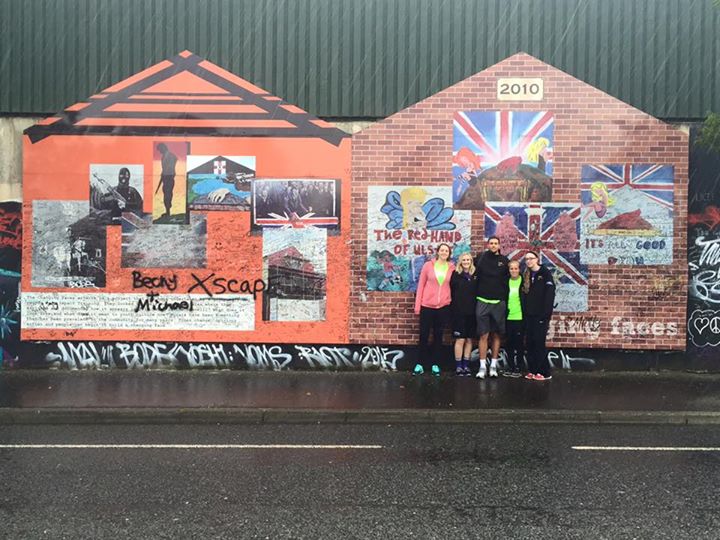 I love studying religion. I am fascinated by how religion has shaped the course of history, and I enjoy observing how religious faith has structured societies. The very breadth of religious belief among human beings is astounding to me, and studying these beliefs in the classroom has been a major highlight of my time in college.

When I visited Belfast, I was amazed to witness for myself the way that religious division has shaped the city. Our visit to the Peace Wall inspired a lot of reflection; it made me think about how the Wall’s imposing height represents the enormity of the city’s history of divisiveness.

I was lucky enough to sit in on a cross-community conversation among E-Hoops participants. A fellow scholar asked an interesting question about the religious division; he addressed the mixed group of E-Hoopers and asked about the difference between a Catholic and a Protestant.

My academic background – being a double major in Religion and History at Davidson – prepared me for a very specific answer to this question. I began thinking about the history class I had taken in college titled “The Explosion of Christendom” about the reformation and counterreformation. I thought of Martin Luther and indulgences, of theological debates and the Thirty Years’ War.

But the answer that a young Northern Irish man gave was not what I was expecting. He explained that those doctrinal differences are not what people focus on anymore. The conflict is history being lived in everyday life; a conflict rooted in the past, branching into the present.

I loved being challenged to think beyond what I have been taught. In this case, I was challenged to think beyond religion as I have read about it in countless books and articles, and instead witness its effects in everyday life. This brief exchange at an E-Hoops meeting has given me such a greater appreciation for what Sport Changes Life does, especially in Belfast. Sport really does bring all sorts of people together and encourages them to work together. My time in Belfast was really incredible; the more I learned about the SCL foundation, the more excited I became for this upcoming year.