All for the Craic 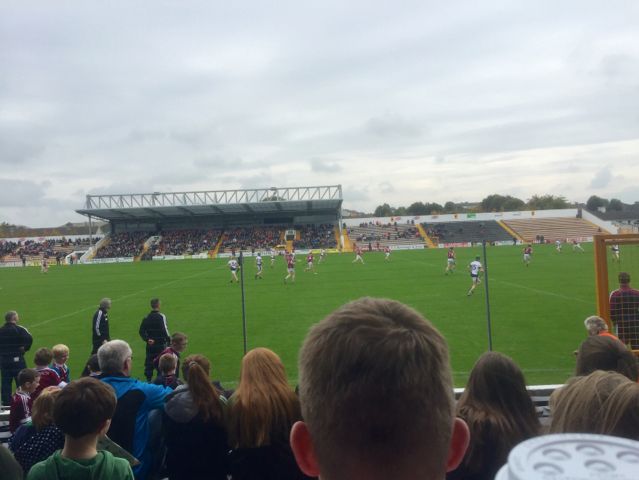 Today, Sinead took Katie and I to watch our first camogie match in Waterford. Camogie is an Irish sport for girls and is equivalent to hurling. Katie and I have never been to a live Irish sporting match so Sinead thought it was a perfect opportunity to take us to her sister’s game and to see some hurling matches later on. All of the girls were competitive and tough but the team we were rooting for lost. Afterwards, Sinead drove us to Kilkenny, a city notorious for its dominance in hurling, to watch two of the county hurling league matches. Earlier in September, Katie and I watched Kilkenny play on TV and our excitement then did not compare to our excitement to watch it in live action.

The arena was extremely packed for a match full of unpaid, talented hurling athletes that play simply for the craic. In Ireland, “craic” pronounced as “crack”, is a word used to describe fun, having a good time or a laugh. For players that train hard five times a week because they wholeheartedly love the sport is unbelievable. In America, majority of the players play competitively for fun but the motive to earn a million dollar salary or have a free college education is the main driving force to play sports. I have the upmost respect for Irish sport players where their passion for sport does not derive from materialistic ambitions.

Many of my teammates on the Wildcats club basketball team play merely for fun as well. Last night, our team played our second super league match against the Port Laoise Panthers. We almost lost the game but managed to pull out a win. After the game, Sinead’s disappointment on her free throw performance struck me the most. With two minutes left, she missed some important free throws keeping the Panthers in the game. My past coaches have always preached to me: “it’s not about how many times you miss, it’s about making the shots that count”. Finishing the night 3 for 8 from the free throw line isn’t great, but it is definitely nothing to be unhappy about. Sinead’s ability to remain mentally tough to make the second free throw after missing the first ones and our team finishing with a win are “happy days”. We shouldn’t take for granted for the little things because if she missed both free throws we may not have won.  For a player who is so hard on herself and plays for the love of basketball speaks massively about her character and the Irish culture. I am thankful to be absorbed into such a great culture and look forward to finding some good “craic”.