ARE YOU THE AMERICANS? 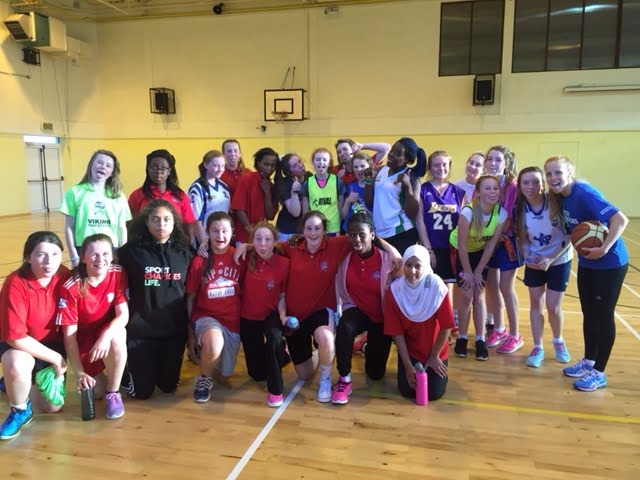 On Wednesday this week Jazmen and I took on some extra coaching responsibilities at the Presentation Secondary School outside of our usual coaching hours. Most of the girls at Presentation hadn’t had a session with us yet. As such, we were treated with a semi-celebrity status throughout the day. When we arrived at the school, we didn’t even know where the gym was—but upon just walking through the main entrance, one girl froze and said in disbelief, “Are you the Americans?” The school was buzzing because all the girls had heard that two Americans were coming to coach them that day.

We told her that we were indeed the Americans, so she and a friend offered to lead us to the gym. It was full of wide-eyed and excited young girls of about 11 to 13 years of age. Jazmen and I introduced ourselves in front of the sea of shining faces and explained the first warm-up drill. As soon as we finished, the girls jumped up to get started. While everyone ran out onto the court, two girls stopped quickly to say to Jazmen and I: “I love your accents!” and, “Can you talk more?” We assured them that we would be talking plenty throughout the session, and off they went too.

All of the girls were so excited that Jazmen and I were there that they were a pleasure to work with. They followed all of our instructions as best they could. I could see the determination in their eyes when we gave them something more challenging to try; they wanted to show us that they could do it.

Best of all, at the end of the session when I asked the girls if they wanted to take a picture with Jazmen and I, I heard a few screams of “SELFIE!!!!” and was immediately crowded by all the girls jumping to get in the picture. By the time I snapped the picture, there were so many people surrounding me that I couldn’t even fit them all in the shot! So after the big group photo, a number of girls came up to Jazmen and I and begged us to take a picture with them individually, which we happily obliged.

Our second session of the day went much the same way. The girls in this session were a bit older than the previous group, but equally excited for our hour and a half together. We even gathered a decent crowd of girls who came in simply to watch since they had a free period from class. During one of the girls’ drink breaks, I casually shot a three-pointer and there was a murmur of excitement from players and observers alike when it went in. I was mildly surprised because I have come to take the ability to shoot threes for granted, but the 14, 15, and 16 year olds in the gym seemed to think it was impressive. At the end of this session, Jazmen and I got another photo with all the girls, but this time we had someone else take it so that we could fit everyone in. As the girls left the gym they shouted behind them, “Add me on Instagram!” and, “Are you going to put that picture on Facebook?!”

My experiences on that Wednesday highlighted for me the impact that bringing Americans into the Sport Changes Life program has on young children. Some people might have wondered why Sport Changes Life brings Americans all the way to Ireland to inspire its youth rather than turning to equally qualified Irish coaches. I myself have already met a number of extremely qualified and engaging Irish coaches and players who would be well up to the task of working with young people in the community to better their lives. Yet I think Sport Changes Life has recruited Americans for the job simply for the pseudo celebrity status that was displayed in Presentation Secondary School on Wednesday.

When kids hear that Americans are coming to coach them, they buzz. They are excited that we talk in funny accents, that we come from a strong basketball country, that we give them drills to try that they perhaps have never heard of. They are always itching to tell us about that time they went to America, or that cousin or aunt that lives in the U.S., or simply to find out more about where we’re from. Bringing in people who are unique from those that the children interact with on a day-to-day basis makes them that much more excited to participate in sport. That is the goal of Sport Changes Life—to bring in people who are different, who can get children excited about sport, who can inspire children to lead better lives by sharing their own stories about how sport brought them all the way to Ireland. And when the kids at Presentation gawked at our accents, set their hearts on success in our drills, and crowded around us for selfies, I couldn’t help but think that Sport Changes Life was well on its way to achieving its goal.