But the Ball was on the Line 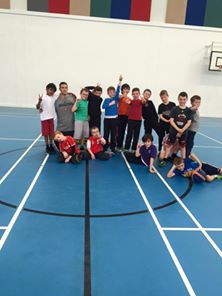 During a recent coaching session with boys about the age of ten I had an eventful hour of coaching. After doing the typical ball handling and shooting drills the boys were begging me let them “play a match.” At the end of the session I decided I would let them play a game of 5 on 5. With some difficulty I explained to them that playing a game was the same as playing a match.  Eventually the kids were eagerly playing in the fashion anyone would expect ten year olds to play, ten guys swarming the ball. At one point a player tried to save a ball from going out of bounds on the side-line. As the ball hit the side-line I called it out of bounds, and gave the ball to the other team. The player then passionately argued the call telling me that he saved it because the ball was on the line. I couldn’t help but laugh as the player so passionately reinforced that I in fact made the correct call. I then had to explain to the group that basketball was unlike soccer in that on the line means out of bounds. In many years of coaching and playing in America this was not an issue even one time that I can think of. I guess that is what to expect when there are a lot more indoor soccer shoes being worn than basketball shoes.  This is just one of the issues that have arisen when playing and coaching in a country where basketball is not the most popular sport, or the second or third, or maybe even the fourth or fifth for that matter.