No Scholar Left Behind 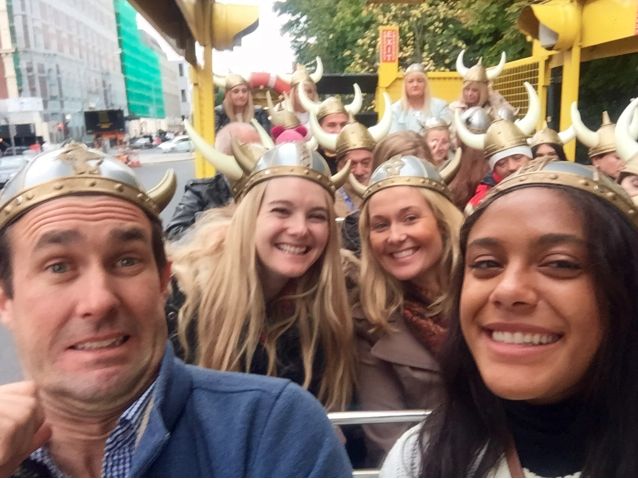 Spending every waking moment with the other twelve scholars and getting to know them on a personal level made my first two weeks in Ireland a tease. Now that we are all settled into our places all over Ireland, I hardly ever see or hear from them. Although I miss each and every one of them sincerely and think about them often, Katie and I’s day trip to Dublin helped alleviate some of the sadness. Katie, Sarah, Clare and I all decided to go visit the Trinity Scholars, Meg and Emily or “Mary”, in Dublin.

As soon as we saw the other scholars, my heart was filled with joy. Being able to hug and laugh with some friendly faces is ten times better than seldom speaking to them on social media or a fast pep talk in between a coaching session or a basketball game.

We rushed up to Meg and Em’s apartment (by the way it is the cutest little studio apartment) to eat some breakfast and chat until Ireland’s rugby match against Argentina. Quickly after, the gang got ready and hit the nearest pub to watch the game. The start of the match was not looking pretty for Ireland and out of us six scholars, none of us had an actual clue on what was going on. Luckily, the Irish picked up the tempo where the score went from 3-14 to 20-23. Right when the match was getting interesting, we decided to head back to Meg and Em’s apartment to buy online tickets for Dublin’s Viking Splash tour.

As cheap college students, we were so down to buy tickets online since they were less expensive but the process took longer than expected. We were all so caught up in enjoying each other’s company we lost track of time. The Viking tour started at 3:30 p.m. and it was already 3:15 p.m. Instantly, we all grabbed our belongings and jetted out of the door and ran through Grafton Street like lunatics. You would think as athletes that we would be in tip top shape for a causal half a mile sprint….well you’re wrong. We were all so breathless and tired during the entire run; we all started giggling at how out-of-breath we were as athletes and how ridiculous we looked running through the streets of Dublin.

Fortunately, we caught the tour right on time but tardiness does have its cons. Seating on the bus was VERY slim and only five of us six girls could sit together and guess who had to sit next to strangers…..ME! Although I missed out on all of the jokes and fun going on in the back of the bus with the other girl scholars, sitting by myself in the front was just as fun! I asked for the other tourists who happened to be American to take a picture with me and they were so down. The Viking Splash tour was amazing and I learned some cool facts about the city of Dublin. The best part of the tour was when the bus turned into a boat and we were riding along the river.

Even though I was left behind on the tour, today marked one of my favorite days in my Irish journey. I love each and every one of the scholars and exploiting opportunities to spend any moment or second with them is my kind of fun. You can look at the Viking Splash tour as one scholar left behind or you can look at it as an unforgettable reunion.