The Basketball World is a Small One 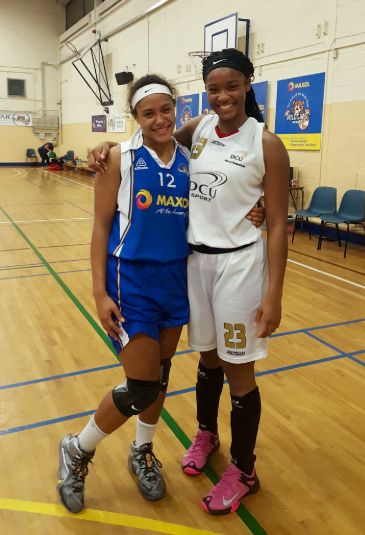 At 7 p.m. in Mercy’s Secondary School gym tip off was sparked for the first scheduled Super League match for the Waterford Wildcat’s against DCU Mercy. The thrill to win and perform exceptionally in front of our Waterford fans was not the only excitements I had about this game. Our competitor, DCU Mercy, had a girl on their roster that was my long-time and good friend named Chelisa Painter. Chelisa, or “Lee Lee”, and I have been pals since my high school days, from training together in sessions to playing against each other for the rest of our basketball careers. For those that have no idea about the basketball world, it is an extremely small one that bonds people through their love of the game. Lee Lee and I’s friendship revolved around our passion for basketball: in high school, we battled for the state title in Virginia and in college she played at Old Dominion University, an old William & Mary rival that we had on our schedule every year, and now we were playing against each other overseas. The only time we ever played on the same team was in the summer for a basketball amateur league hosted in our home state, Virginia. Despite our competitive basketball nature, we have always remained great friends.

True competitive basketball players never acknowledge each other too much during warm ups or tip off. Now these actions are not because we don’t like one another or that we aren’t actual friends, but real competitors play to win and playing friendly basketball doesn’t result in a win. Based on that statement, you can bet our teams battled throughout the game in which I had to guard her for most of the match (how convenient – she’s 6’2” and I’m 5’7”!). Despite our hard fought efforts, my team lost by a significant amount of points. On the bright side, Lee Lee and I were both the leading scorers for our teams.

After the match, we gave each other a big bear hug and talked about a wide range of things from basketball to our Irish experiences so far. In Virginia, Chelisa and I are from an area where people constantly boast about our area code “757”. However, seeing her friendly face was more than a prideful moment of home it was the continuation of a long lasting friendship that will never cease to exist. #757