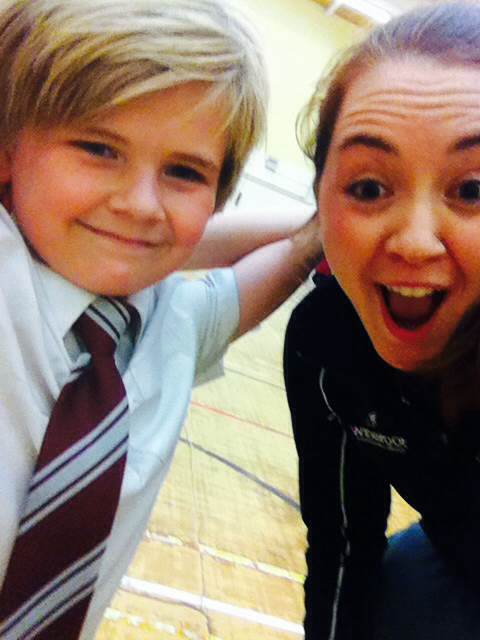 James and I spend our Thursday afternoons coaching a group of boys at Abbey College. On this particular Thursday it rained. A lot. We were midway thru Texas layups when it suddenly sounded like a tidal wave crashed onto the roof of the sports hall. The old ceiling couldn’t take the downpour and before long, small puddles began forming all over the court. Along with the water from the roof, a handful of students came into the gym from outside to avoid the rain. So we split the court in two and while the team scrimmaged on the less-wet half of the court, the boys who escaped the rain used the other half after raiding the gym’s storage closet for something to play with.

Sitting on the bench overseeing the scrimmage, I caught eyes with one of the youngest regulars at the basketball sessions. Christian, who is too young to scrimmage with the older boys, found an American football from the storage closet. He stood next to me holding the football and ordered me to stand up and go long for a pass. Without hesitation, I stood up and ran a route. We passed the ball back a fourth, trying to perfect our spirals and punctuating each catch with a touchdown dance. On my walk home, I reminisced about the days when a simple game of catch would keep me endlessly entertained. All it took to keep my brother and I occupied was a quiet side street and a tennis ball to pass back and forth. It was great revisiting that feeling with Christian playing catch with the football. He found the same enjoyment I once did as a kid as he celebrated each spiral and catch.

Yes, the rain threw a monkey wrench into basketball training. But if it hadn’t rained, I would have missed out on an epic game of catch with a new mate.