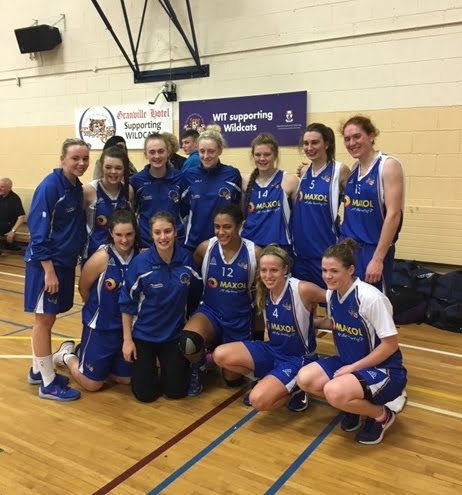 I’m exhausted and covered in sweat and my hands are still shaking from that end-of-the-game anxiety, but I am happier than my words can express. The final buzzer has just sounded, and my Wildcat sisters and I have just come out victorious over the powerhouse club and reigning champions, Glanmire. Although I haven’t been a part of the Super League in Ireland for long, I have become very familiar with the dominance that is associated with Glanmire. For the past few years they have basically won everything. In fact, none of the current players on the Wildcats—some of whom have been playing for them for six years—have ever won a game against Glanmire. Until tonight.

With the game tied at 60-60 with about 17 seconds left, Glanmire had two free throws. My insides were like jelly and in my head I was screaming for the girl to miss. Somehow, she did, twice. But just when I thought we were in the clear, a Glanmire player pulled down the rebound off of the miss and was fouled shooting. Now with 16 seconds left, we were in the same exact position. As much as I tried to be optimistic, I just could not believe that another player would go 0-2 from the line. And then, miraculously, she did. Boonie leapt up and got the rebound—I swear I have never seen anyone jump the way she does!—and blasted up the court with the ball. She drew about three defenders before kicking the ball to Cathy Kavanagh for a short baseline jumper.

The crowd, which had been electric all night, erupted in the small gym. I have played a lot of basketball games in front of countless crowds, but I think that might be the loudest I have ever heard a gym get. My ears were still ringing for hours after the game.

There was still 5 seconds on the clock, and Glanmire had one more chance at a shot, but couldn’t connect. The buzzer sounded.

That familiar sense of relief, triumph, and pure happiness washed over me. I am an extremely competitive person, and I take basketball very seriously, so winning is very important to me. But this win was different. This win was special. Not because I played well or made a few shots or because our record gained another win. No, this win was special to me because of what it meant to my teammates. When I looked into their faces as we celebrated our victory, they simply beamed. The excitement, the pride they felt shone in their eyes. They had finally defeated their Goliath, and I felt incredibly lucky and proud to have been able to play a part in it. One of the girls was even so happy that she began to cry; her eyes weren’t the only ones that got a little watery. A number of parents and community members rushed over to congratulate us, and there were certainly a few who didn’t have dry eyes. Waterford fans are the greatest. I saw in them the same excitement and pride reflected on my teammates’ faces. I’ll never forget their kind words of praise and support. They made me so proud to wear a Wildcats jersey.

When Jaz and I joined the Wildcats just a few short months ago, we didn’t quite expect to become so close with our teammates so quickly. But they—along with the community in Waterford that has welcomed us so warmly—have become our family here in Ireland. I want nothing more than to continue winning for the Wildcats, if for nothing else but to see that look again on the faces of the people I care so much about.