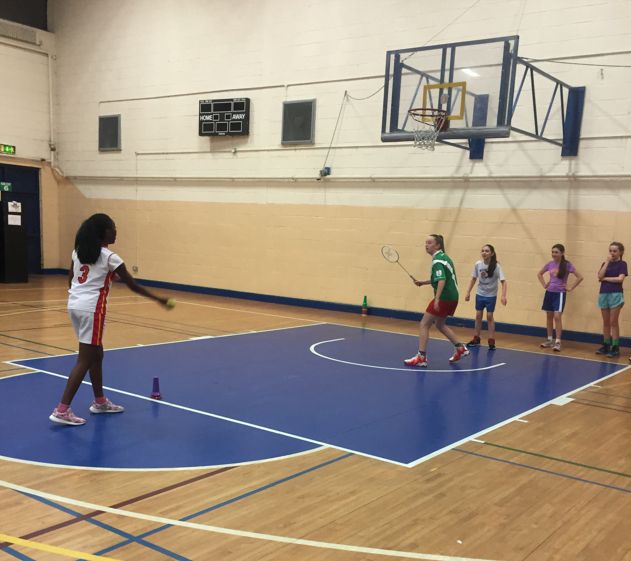 Tis’ the season to be jolly! The Christmas holidays are around the corner, so today’s practice with my 12 and under girls will be my last one until 2016. As much as we want the girls to get better at basketball, Tony and I agreed that practice should be fun and full of games.

The practice started with a game called “Ladders” which is a different version from the game “Catch the Bacon”.  All the girls sit on the floor and each player faces another, both assigned the same number. When their assigned number is called, the first player to grab the ball, which is placed in the middle of the court, and score a basket earns a point.

However, this warm-up game wasn’t the game that put me in shock. The next game the girls begged me to play a game called “Rounders”. As soon as I agree the girls began setting up a game similar to a sport we have at home in America: baseball. Bases were replaced with cones, a tennis ball instead of a baseball, and a badminton raquet as a baseball bat. Thinking the game is actually baseball but titled a different name, I started calling out rules and the girls looked at me puzzled. They asked, What are strikes?, What are innings? , and If we get three strikes, does that mean we are out for the rest of the game?. I was amazed. A sport that I grew up with and played with was non-existent in their life. The original game “Rounders” was slightly similar to baseball but catching a “pop-fly” or ball hit by the bat (raquet in this instance) meant the player was out for the entire game unless someone hit a non-stop home run, since you couldn’t rest on bases in their version of the game.

The girls ended the practice with a basketball match shortly after. All I could think about during that time was the sport culture difference here in Ireland compared to America. Sports, like baseball or American football, were engrained in our sports culture just Irish sports, like hurling and Gaelic football, were to my 12 and under team. I soon remembered how their sports were a completely different language to me when I first arrived here, and this same idea was probably going through their minds when I was explaining baseball to them. Without my opportunity with Sport Changes Life, I probably would have never even learned or heard about hurling or Gaelic football and my team would have never learned how to properly play baseball.

At the end of practice, I gave Tony and the girls some American Christmas candy, or sweets, and a personal Christmas card from Katie and I. Spreading the holiday cheer through American sweets and sport ended the year perfectly with my Wildcats team.