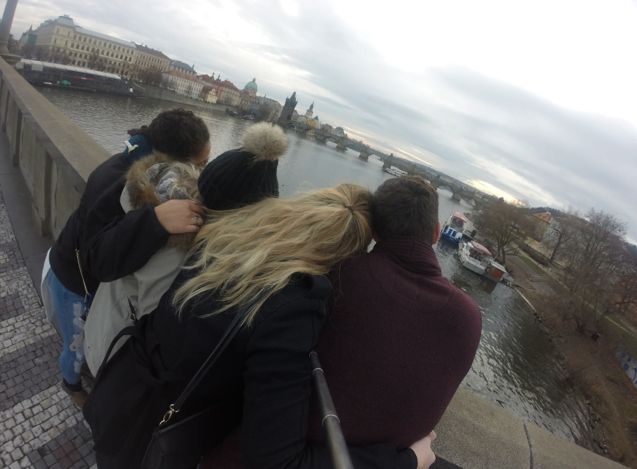 Prague. Stunning views from the infamous, ancient Prague Castle overlooking the entire city. The intricate, cobblestone structure of the Charles Bridge. Vibrant colors and artistic expressions painted on the John Lennon wall. Prague’s layout and architecture details of its buildings is unquestionably one of the world’s most immaculate cities.

Instantly walking through the city upon arrival, I was obsessed. Interestingly enough, Prague celebrates Christmas Day on America’s dated Christmas Eve, the 24th of December. Cory, Meg, Emily and I decided to explore Prague’s Christmas market before delving into its nightlife scene. The food was unbelievable. Their noodles, or gnocchi, goulash flavored meat, and roasted potatoes turned a plate of food into bliss. You would think all Christmas markets are the same, no matter where on the globe. I’d vouch to say that Berlin and Prague had amazing Christmas markets where the food and gifts offered define each city as its own autonomy.

The very next day, our crew decided to spend Christmas Day exploring Prague. I have never seen so much beauty in one city where I caught myself incessantly taking picture after picture, I couldn’t help myself. From the Charles Bridge to John Lennon’s wall, there wasn’t one bad thing about Prague. Since it was Christmas Day, Meg, Cory, Emily and I treated ourselves to lunch. Again, the food was incomparable to anything I’ve had before where their “dumplings” or more like bread was different than a typical Asian dumpling.

Fully exploring the city it was time to head back to FaceTime our families and do our Secret Santa. I’d definitely say Secret Santa was my favorite part of this trip. For a group of people that mesh sooooooo well with each other the gift exchange was hilarious.

Meg went first. The gift she was giving was going to…..(drumroll please)…..Cory Starkey. Smiling wide, he opened his gift. Looking in he pulled a large Berlin mug out of the bag. Giving Meg much thanks and appreciating the mug as it was something he needed, he handed out his gift to……Me! I started to wonder what was in the bag. Reaching my hand in, I pulled out sleepy puppy gloves, turquoise slippers and German deserts (which were so good). Loving my gift and thanking Cory for everything, I handed my gift to Em. Opening her gift happily, she pulled out a painted candle holder of Berlin (thanks Meg for helping me out, apparently Emily LOVES candles 🙂 ) and she was extremely grateful for my gift to her. Last but not least…Meg. Opening her gift, which she adored so much, got similar things that I did with different deserts and pink, not turquoise, slippers. Ending the gift exchange full of laughter and smiles, I’d say it was a good Christmas.

Although it was difficult for each one of us to spend the best holiday of the year away from our families, I believe we wouldn’t trade such an amazing experience for the world. So far, my eurotraveling experience is an once-in-a-lifetime opportunity. I wouldn’t have wanted to spend my Christmas eurotrip with any other group of people, especially in such an extravagant city like Prague. As each day of my trip got better and better, I’m starting to get closer and closer with my fellow scholars.