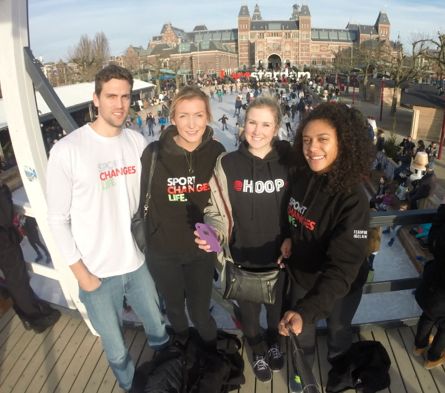 We’re in Amsterdam and it’s St. Stephen’s Day (what the Irish call the day after Christmas). My immediate reaction was “why are there still Christmas markets the day after Christmas?” Not saying I’m complaining because I do LOVE Christmas but it was a little strange. However, Amsterdam celebrates the Christmas Holidays and New Year for a week where everyone is free from work until January 2nd. No wonder the streets of Amsterdam were so packed!

Amsterdam held its own kind of beauty, as it wasn’t scenic like Prague. Canals ran through almost all of its cobblestone streets; brick buildings glued to one another. Boats, even houses, were floating above the canal waters. Bikers pedaling their way along the streets or bikes chained up on outside benches or rails. Nothing was what I expected.

Although a touchy topic, I had a small culture shock on the country’s views on drugs and prostitution. Such promiscuous behavior in America is frowned upon where in Amsterdam it was accepted. The Red Light District, an area specifically designed for such sexual behavior, was one of Amsterdam’s top tourist attractions. Even marijuana was legal. But these traits of Amsterdam is the whole point of traveling – understanding that normalcy is subjective varying from culture to culture and to each is own. I’m an open-minded person that loves how everyone is different, and if you aren’t an open-minded person I believe traveling will definitely make you so.

There’s also some history that lies behind Amsterdam. The crew (Emily, Meg, Cory and I) decided to check out Anne Frank’s house. I heard of Anne Frank’s story, a young girl who was a Jewish victim in the Holocaust, but not in great detail. Leaving the museum I was at discomfort. Anne Frank was forced to remain in hiding while living in Amsterdam behind closed doors, never having the opportunity to live a real childhood. The stress of surviving another day with little rations for a girl at such a young age I realized my life has been a blessing.

Seeing parts of the world I’ve never even dreamed about with such amazing friends, sport has and continues to change my life in more ways than one.