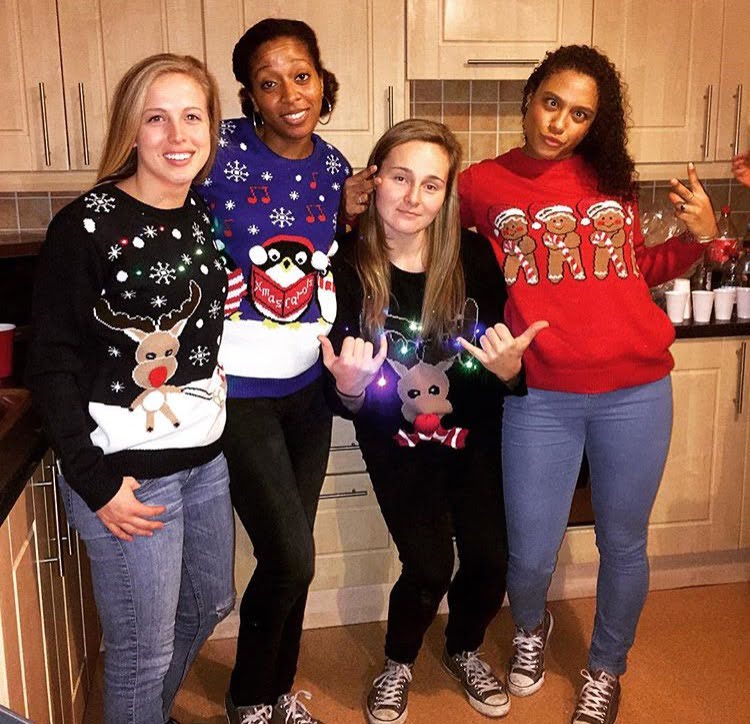 Christmas is easily one of the best times of year! The beautiful decorations, the festive songs, and spending time with friends and family are some of the many things that make it great. Obviously, I am spending this holiday season in a new place, with new friends, but nonetheless, it’s still awesome.

Although it is different, it is definitely not a bad thing. By being in Ireland for the holiday season, I am privileged to experience how other people, in a culture other than my own, celebrate the most wonderful time of year! And let me tell you… it’s pretty great!

After the National Cup Game, I decided to spend the night in Waterford with my fellow scholars, Katie and Jazmen, and of course the #bornagainscholar Kelsey. As an added bonus, we got to hang with the Wildcats team at their Christmas party. Since it was a Christmas party, it obviously met we had to wear Christmas sweaters; so original, right? But as no surprise, everyone had awesome sweaters! I thought I was going to be pretty cool for having a light up one, but then after walking into the room, I realized everyone had the same idea. We all looked like walking Christmas trees. What could be better?

The next day, we briefly went around Winterval, Waterford’s version of a Christmas market. It was such a cute set up, with street vendors, pretty lights and decorations, and so many things to do! It really was beginning to look a lot like Christmas, and I could not be happier about it. It made me so excited for my upcoming trip with a few of the other scholars to see the Christmas markets in Germany!

It was a lot of fun to be back together with Katie and Jazmen, even though it’s beginning to happen every other weekend 🙂 Regardless, it was a great evening. But to me, one of the best parts was how welcoming the Wildcats team was toward their opposition in a match that concluded just a few hours ago. It’s a recurring theme I’m seeing in Ireland, the premier league really is a basketball community that is competitive on the court, but once you step outside those lines, everyone is incredibly friendly and welcoming.