The Greatest Gift of All 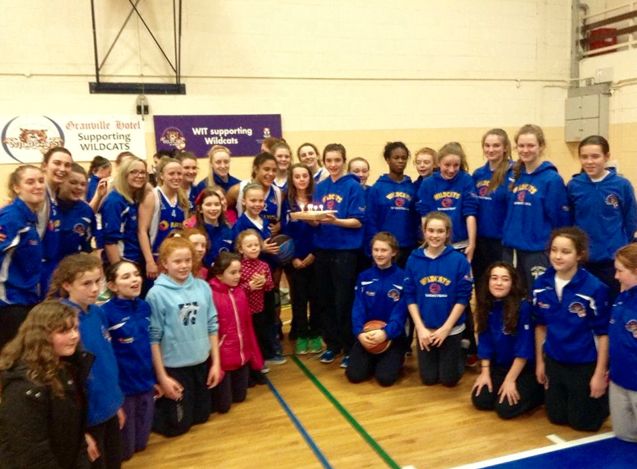 Waking up Friday morning…it was weird to say that I am 23 YEARS OLD! When people say time flies, it really does. Celebrating my birthday in a new country with new friends, I had no idea what to expect.

On Friday, Katie and I went for lunch in the city and afterwards got crepes in Winterval, an event hosted by Waterford transforming the city center to a Christmas-y theme. Completely content with the day’s event, I thought my birthday celebration was over. Returning from the city, I surprisingly found my roommate, Maidy, and three of the Wildcat players, Mel, Helena, and Sinead, in Katie and I’s dorm singing happy birthday to me. There were balloons sprawled all on the floor and a perfectly lit, homemade carrot cake (my favorite kind of cake), made by the best, Katie and Maidy, laid out on our kitchen table. For presents, Mel, Sinead, Helena, and Katie gave me an Irish rugby jersey and Maidy gave me a personalized tea mug. My ecstatic reaction to these gifts were priceless, not because they were amazing presents, but because the girls knew me so well. Sometimes paying attention to small details about a person is a greater gift than the gifts themselves.

Since birthdays are usually celebrated in a weekend’s time, the birthday love on Saturday was incredible. The Wildcats had a huge Super League game against Glanmire fighting for the top positions in the league. The crowd’s constant exhilaration throughout the match and each team clawing their way for a lead heightened the gym’s atmosphere. Despite predictions, Wildcats brought home the victory with only 17 seconds left on the clock. Even after winning six games, the Wildcats LOVE winning and never take it for granted where winning our sixth game was just as sweet as winning our first. The win was a great birthday gift especially knowing that the club, up until now, had never defeated Glanmire in the past 5 years and knowing how much that win meant to the club.

As soon as the buzzer went off, all of the young girls Katie and I coach ambushed the court hugging and congratulating us on the win. Out of the blue, Jillian Hayes, our community partner, held out a lit chocolate cake and the entire Wildcats club began singing happy birthday to me. I started crying swarmed with emotions of happiness.  Feeling the birthday love after the match, witnessing tears of our close friends within the club after sealing the win and have it bring such great recognition to the club, and realizing the love the parents and girls have for Katie and I defined the surreal moment. It is a gratifying feeling to be an inspiration to the girls and to the club. For the first time in my life, I feel like I am doing something right and hoping to continue to make everyone proud to be a part of the Wildcat organization. Thank you to the club, Katie, Maidy, and my teammates for an unforgettable 23rd birthday creating memories that I will bring with me forever.