They’re lighting the lamp in Belfast 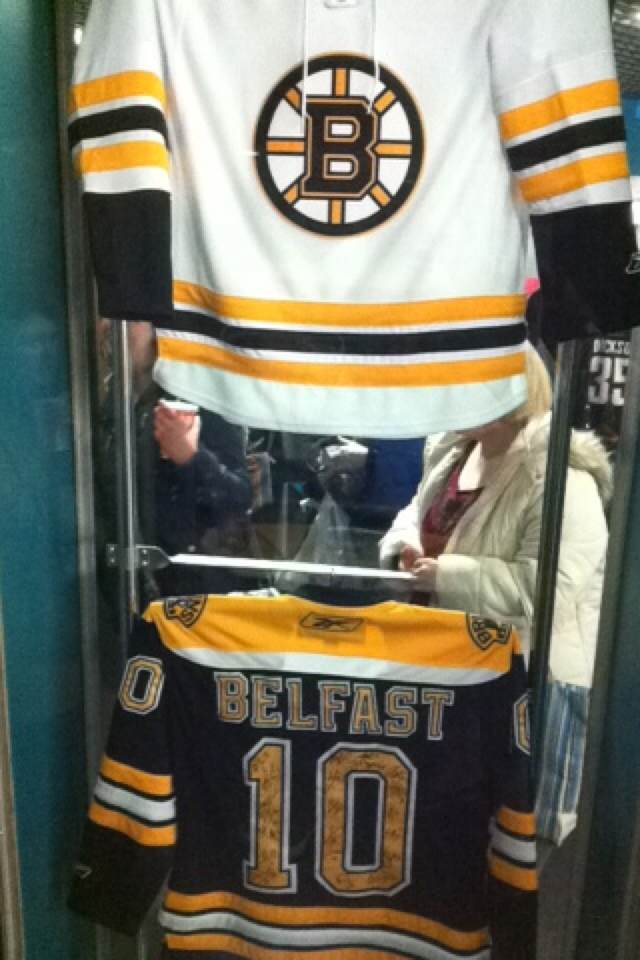 I have had a couple of doses of ice hockey here in Belfast so far this year. My first Belfast hockey experience was a Belfast Giants game, the professional team here in Northern Ireland. I tagged along with Laura and Ruth, two of my friends here at UUJ, to go watch three of our Giant classmates do their thing on the ice. I’ve gotten to know Chris, James and Johan in the classroom and working with them on group assignments. It was surreal to see them on the ice and their action shots on the walls of the SSE Arena. After the game, Laura, Ruth and I waited for the guys to come out of the locker room to chat. Feeling like a Giant groupie, I was meandering around the arena when something black and yellow caught my attention. A Boston Bruins’ jersey was hanging on the wall in the hallway! It was exciting to stumble upon a little reminder of home, and for a second it almost felt like I was at the Garden at a Bs game.

I later discovered the extent of the hockey connection between Boston and Belfast when I attended The Friendship Four. The tournament featured four US college hockey teams and was inspired by the infamous Beanpot tournament that takes place annually in Boston. A number of us from SCL were lucky enough to enjoy one of the games in the tournament between UMass Lowell and Northeastern. From my seat right at the glass, it was strange to be watching two Massachusetts teams going head-to-head a world away from home!