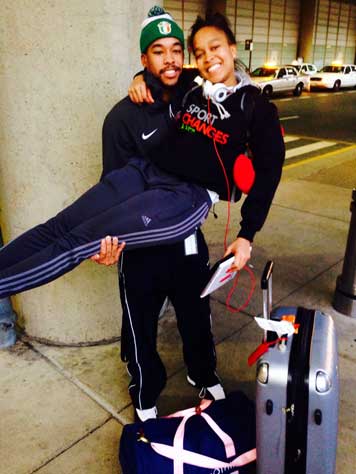 I’m uncertain if I’m inherently the type to focus on the future or if it was college, specifically my coaching staff, that made me this way. I mean, one of Coach’s 3 Life Rules* were, ‘Stay one step ahead.’ I think it’s safe to say the latter must be true. Actually, I take that back. It was absolutely college athletics that changed me. By nature, I am 100% the nostalgic-romantic-replay-life’s-moments-over-and-over sort of girl. But your memory has to be shorter than a New York minute in basketball so I needed the indoctrination. But given the time of year–a time of wishes and resolutions–I hope you’ll all forgive me for reverting back to my old self while I reflect on this past year.

Ireland:
It was nearly a year ago when I was sitting at a computer in the 24 lounge on Rider’s campus trying not to let emotions overtake me as I filled out the Victory Scholar application. There’s still something so surreal about being here, about knowing then that this was something I was meant to do. So I’m forever grateful to SCL and The Forces That Be for this opportunity/family and these precious moments, even if they’re not snow-covered.

The Kids/The City:
Walking down Shop Street I honestly find myself singing, “Sometimes you want to go where everybody knows your naaamee”. It’s been ages since I’ve even seen the show where I got that tune from but Galway just brings it to mind. I always run into kids that I have coached: boys from St.Pat’s, the Academy kids, my Pres girls. It’s a homey feeling where instead of being treated like a foreigner, everyone treats me like a good neighbor.
How cool is that?

My Teammates/My Friends:
When you’re the new kid on the block it’s always hard to know what to expect. But I honestly couldn’t have asked for a better group of girls to be around this year. (Of course, I have much love for the Titans lads too

So here’s a toast to 2015 for bringing everything anyone could ask for in one year and setting the bar!

*In case you were curious- Coach’s other two rules: 1. Be aware of your surroundings 2. Look people in the eye

** It was traumatizing and deserves it’s title. It will live on in infamy in my mind though I can laugh at it now.