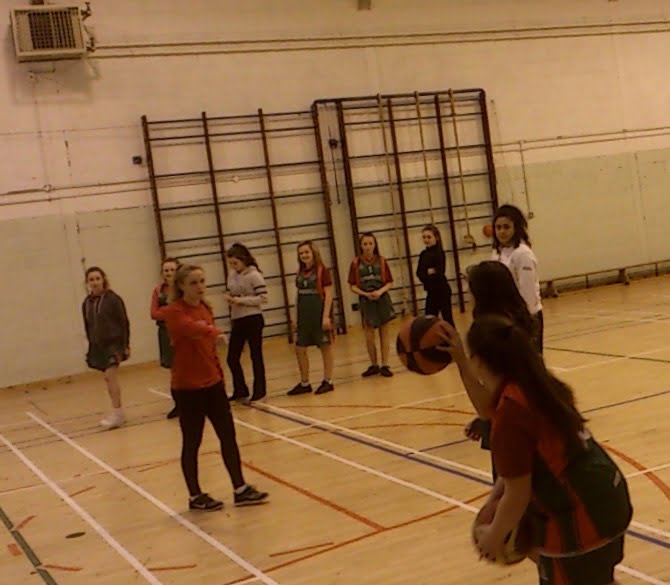 As Victory Scholars in the Sport Changes Life program, Jazmen and I spend a lot of time coaching in local Waterford schools. Every day that we have the opportunity to impact a young person’s life for the better is a day well worth waking up for. Today was just that.

We had a two-hour coaching session at St. Paul’s Secondary School. Our Wildcat teammate Helena Rohan joined us as we ran 13 high school age girls through a practice session. The basketball program is fairly new at St. Paul’s and is only really just gaining momentum. However, despite being a young program, the St. Paul’s basketball team was able to become the D league champions last year, indicating it’s status as a very promising program.

Similarly, the young players themselves showed great promise. Most of them too were only beginners at basketball, or had limited experience with the sport. Yet, they had great attitudes towards the unfamiliar drills that Jazmen, Helena, and I threw at them. Their effort and eagerness to learn were never lacking. And it showed in the small yet significant improvements they made in such a short time period! Their shooting form and accuracy improved as we worked on it; the girls went from air balling to scoring in an impressive amount of time. They were also able to make more and more lay ups on both the right and left side when timed for increments of one minute. Seeing these improvements was heartwarming as a coach. Seeing the girls’ excitement and gratitude was even more rewarding.

Originally we’d planned to do just the one session at St. Paul’s since Jazmen and I already have a pretty busy coaching, training, and studying timetable. However, at the end of the session when one of the girls asked if we would be back again, I couldn’t find it in my heart to say no. And I didn’t want to. I enjoyed the session so much that I will definitely volunteer for another coaching session at St. Paul’s before my time in Ireland is up. It is training sessions like the one today–where the girls are genuinely excited to be there–that make me feel so appreciative of the opportunity to coach here in Ireland. Everyone we spoke to at St. Paul’s, from the principal to the basketball players themselves, was overwhelmingly thankful to Jazmen, Helena, and I for taking the time to come in to coach. In reality though, it was such a wonderful experience that I believe it is us who should be thanking them.

So, thank you St. Paul’s! We’ll be seeing you again soon!