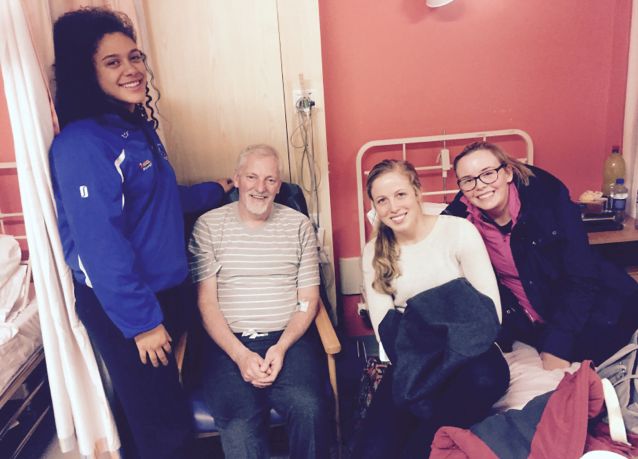 We all have experienced moments in our lives out of our control. What’s even worse? Not being able to do anything about it. Many of you know that there was a National Cup Semi-Final game for the Wildcats against the powerhouse Killester this past weekend. This game was the only game on each Wildcat club members’ mind an entire week in advance before tipoff. Talking nonstop about the game, working extra hard during practice, coming into the gym to get in extra shots…you knew the Wildcats were ready for the showdown. But…

If there was one thing that blindly struck the Wildcats it was the luck of bad timing. Today, some of the Wildcats (Captain Sinead Deegan, Melissa Stone, Katie Fox and I) visited our head coach, Mick Evans, in the hospital. Tuesday before the big National Cup game Mick got extremely ill inhibiting him from coaching us for our Cup Semi-Final game. The hospital visit was lovely but you could tell his coaching absence from our past game did not settle too well with him. All he could talk about was our game and how he watched it over and over. Telling us how proud he was of us for giving our all as well as criticizing us on our game mistakes, I could feel his pain. In all, I believe our visit put him in higher spirits and us girls were delighted to see that he was feeling so much better but then again timing is everything.

In that week’s practice, our captain, Sinead, was recovering from a bad ankle sprain. Her high spirits and determination for the Cup game masked the pain she was enduring with her ankle. Again, timing is everything.

Within that SAME week of practice, Victory Scholar, Katie Fox, tweaked her hamstring slowing down her fast, energetic court speed. Timing is everything.

Then there’s the actual cup game. A roaring, jam-packed crowd without a vacant seat in sight. Our entire club along with the young girls Katie and I coach cheering as loud as they can for us throughout the game (they’re literally the best). Our substitution coach, Jillian Hayes, giving her best efforts to mimic the positive coaching style of Mick Evans, which I’d say she did an awesome job of doing. Shots that we usually made…rolled out. Some referee calls not always going our way. One would think…was this game meant to be? Again, timing is everything.

As much as we wanted that game, as much as we fought hard and gave every ounce of blood and sweat for that game, and as much as it meant to the girls and the club to win that game…we lost and it still hurts til’ this day. Visiting Mick in the hospital gave me a sense of awakening. Things don’t always go your way and that’s life. Yet, your response and spirit afterwards is everything. One thing I admire about playing for WIT and the Wildcats is their strength to never give up and to never stop fighting. Timing was against us and we still stared it in the face and fought hard.

You know what they say “What doesn’t kill you only makes you stronger”.  Looking back on the season full replay in my mind I couldn’t be happier. The past weekend’s results weren’t favorable but seeing how our team has grown from the beginning to now I’d say we have nothing to be down about.