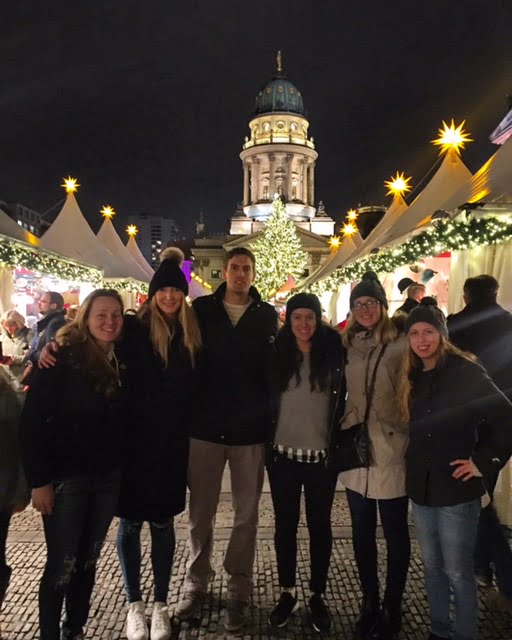 The Christmas holidays were very different for me this year. Instead of spending them with my family in Ohio like I usually do, I decided to take advantage of the time off to see more of Europe. In 11 days I traveled to 5 different countries. My stops included: Berlin, Prague, Amsterdam, Paris, and Madrid.

First on the list was Berlin, so I finished my last final exam and left for Dublin Airport at 2:30 in the morning. As such, I basically slept through the entire flight and woke up in Germany, ready to explore.

Berlin was very spread out, so it was a good thing I was fresh off the plane because we did a ton of walking! I loved exploring Berlin for its history. As a former history major at St. Francis College, I am pretty well known by my friends for being a bit of a history nerd. Being in Berlin felt like watching history come to life. Over the course of our two days there, we went to a number of museums, saw the Berlin wall, and even visited an old concentration camp.

While it was fascinating to see points of interest I’d only ever read about, it was also deeply troubling at times. Walking through the Sachsenhausen concentration camp was probably the hardest part to stomach. As my travel companions and I stood in the gas chambers where thousands were murdered, we were forced to fathom the unfathomable. I was sick to my stomach thinking wondering how something so terrible could have happened in such recent history. It’s hard to believe that humankind is capable of such horrific offences, until it is staring you right in the face, like it was for me that day.

Luckily, Berlin was also full of assurances of the goodness of humanity. When I first arrived, I had to get the train from the airport to my hotel by myself. I was having trouble figuring out which train ticket to purchase, so a German man helped me out. He ended up just buying the correct ticket for me because I didn’t have small change. The ticket was only a couple of euros but the selfless gesture this stranger made for me was very touching nonetheless.

My favorite part of Berlin—and another example of the good people are capable of—were the Christmas markets. They were magnificent. Large squares were filled with a variety of stands selling everything from savory sausages to delicious crepes. The markets were decked out in Christmas lights and carolers that made you feel warm despite the cold. We ended up going to three different Christmas markets because we enjoyed them so much. My favorite one had a massive slide you could go down, so naturally my friends and I jumped in line behind mostly children, but hey, we’re young at heart.

Overall, I really enjoyed my time in Berlin. Although it was a strange mix of somber history and heartwarming Christmas spirit, it was a trip I will never forget.