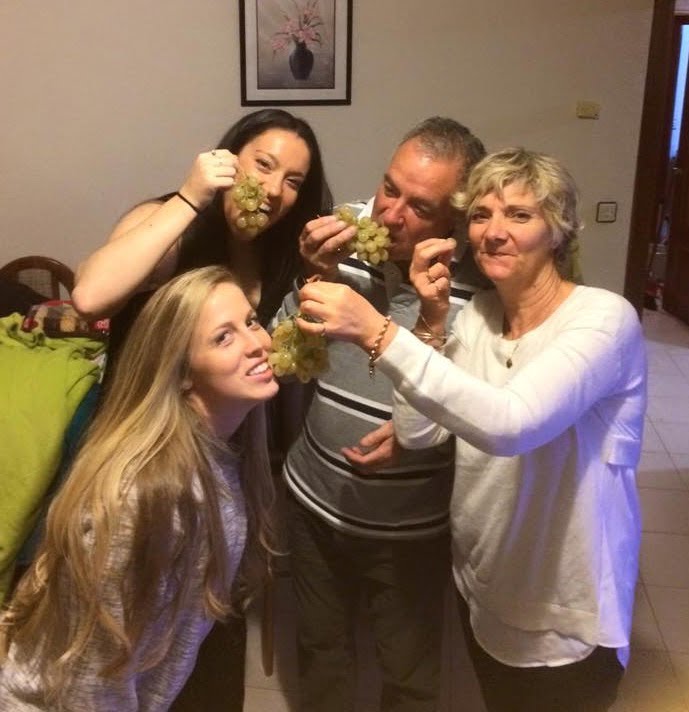 I rang in the New Year in Zamora, Spain, and it was the strangest New Year’s Eve of my life.

Spain was the last stop on my little trip around Europe. I arrived on New Year’s Eve to visit my friend from college, Eilidh, who is playing professional basketball there. In addition, her dad and stepmom were visiting. The four of us met up with two of Eilidh’s teammates, one of whom was Spanish, and the other, Dutch. Our diverse group enhanced its diversity further by going to a Chinese buffet for dinner. Apparently in Spain, New Year’s Eve is an extremely family-oriented holiday. As such, most of the Spanish restaurants were closed and we were pretty much forced to have Chinese because nothing else was open. Lucky I love Chinese food, and that I love buffets even more!

After dinner it was nearly time to celebrate the New Year officially. The six of us walked through town back to Eilidh’s apartment so that we could watch the ball drop in Spain. On the way, Eilidh’s Spanish teammate, Marina, informed us all of the typical Spanish New Year’s tradition. Right after the ball drops on TV, a church bell rings twelve times—one for each of the months in the year. On each dong of the bell, it is the Spanish tradition to eat a grape, so that by the end of roughly thirty seconds, you are standing there with twelve grapes in your mouth. Even the TV announcers do this! Oh—and I forgot to mention, you also have to be standing on a chair throughout this process, and only when you have swallowed all your grapes can you step down. But wait there’s more! You must step down with your right foot first, and then take a drink of your champagne with your left hand. Then you say, “Feliz Año Nuevo!” (Happy New Year in Spanish) and give everyone in the room a kiss on the cheek.

This particularly detailed and somewhat bizarre tradition is supposed to ensure that you have good luck for each of the coming twelve months of the New Year. Even though it seems quite humorous, Marina took it very seriously. She was adamant that we make it back to Eilidh’s apartment in plenty of time to prepare our twelve grapes for the event! Yet she still understood the silliness of it all. When asked if her entire family actually followed this tradition, she said, “Yes, of course, all the women do.” So we asked what the men do while the women stand on chairs furiously shoving grapes in their mouths, to which she replied simply, “Laugh.”

I took away from the experience that it is less about the magical power of twelve grapes to ensure a lucky New Year, and more about starting off the New Year with the very real power of sharing a laugh with close family and friends.