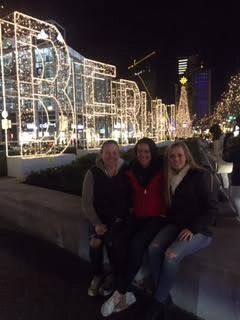 After my quick stay at home in the United States, my next stop was Berlin, Germany. Upon arriving in the airport in Berlin, I had a couple realizations that completely changed my whole mindset. The first being, nobody speaks English here. The second was that I was on my own, and had to navigate from the airport to the hotel all on my own! Originally, I didn’t think it was going to be a big deal until I realized that I had no data or cellular service to help with navigation! Once I realized this, I began to get a little worried about finding my way through a foreign country all on my own.

Now here’s an equation to illustrate this disaster:

Talk about a promising equation!

I have travelled to foreign countries before, but this was the first time I ever had to do it on my own. Not only that, but I have never really had a great sense of direction, or been good at using maps. To say the least, I was a little worried and not overly confident in getting myself to the hotel.

After getting my bearings with the little wifi I had at the airport, I embarked on a bus hoping I had gotten on the right one. The worst part was even after being on the bus for 10-15 minutes; I still had no idea if I was going in the right direction. Thankfully after about 50 minutes of travelling by bus, by metro, and by foot, I arrived at my hotel smiling ear to ear. I successfully navigated my way through Berlin all on my own, with absolutely no Google Maps! That is quite the accomplishment if I do say so myself.

If this travelling event was any indication of what the rest of my time in Europe would look like, I was going to be a pro at navigating with nothing more than just a map and my general sense of direction. To say the least, I have a new found appreciation for Google Maps and a new found skill that I want to improve in.