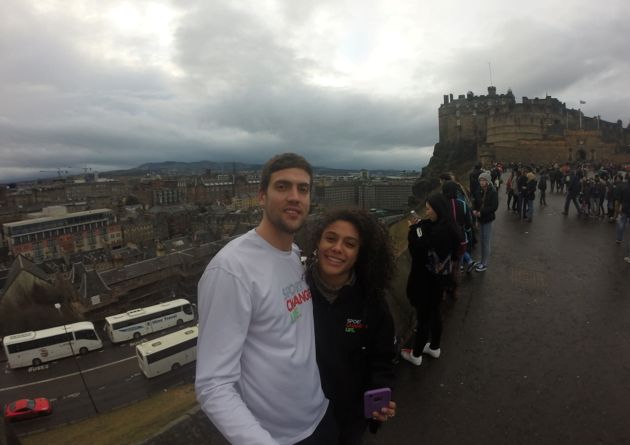 The last four years of my college career I never had the opportunity to celebrate New Years due to practice and game commitments…. UNTIL THIS YEAR! What’s a better way of starting the New Year in a new city, right?

Edinburgh was lovely. Even on a cloudy day it’s deep gray, stone-like personality shines bright. I don’t think you could ever get bored in such a city. Galway Victory Scholar, Cory Starkey, and I had so much fun just by simply exploring and taking in views overlooking the city.

From visiting the National Museum of Scotland, St. Giles’ Cathedral, walking through the Christmas markets (yes, they had markets still going too), and hiking the Calton Hill, I’d say the Edinburgh Castle was my favorite. First, it had an amazing view of the entire city. Second, it was neat learning about the living conditions of prisoners, weapons used, historical information about wars Scotland was involved in, and the sophisticated lifestyle of the Kings and Queens – just an overall great attraction.

As cool as it was gaining historical knowledge about the city, what’s a New Year without a party? Cory and I booked street tickets for Edinburgh’s popular Hogmany Festival event. Streets flooded with people and live performances and concerts at every street end – the lively atmosphere was nothing that I’ve ever been apart of before bringing in the New Year the right way for the first time in my life.

It’s typical for people to have a New Year’s Resolution to encourage themselves for self-improvement. Asked by Cory what my New Year’s Resolution was and I couldn’t think of one thing or maybe mine wasn’t as cool as his “get swole” resolution. The only intention I had for 2016 was to make it better than 2015, which will be really hard to top the greatness that lies in my 2015 year.

As my Eurotrip flew by so fast before my eyes, it will definitely go down as the best trip ever in my life…deeply sad it’s over already. Then again, my traveling spirit is already thinking of places to visit for the 2016 year. Thank you Sport Changes Life, without this foundation I wouldn’t have been able to see some of the world’s most beautiful cities and cultures. Thanks Cory, Meg, and Emily for joining me on this trip, getting to know each one of you on a higher level was pure joy and happy we all became such close friends. So cheers to 2016!