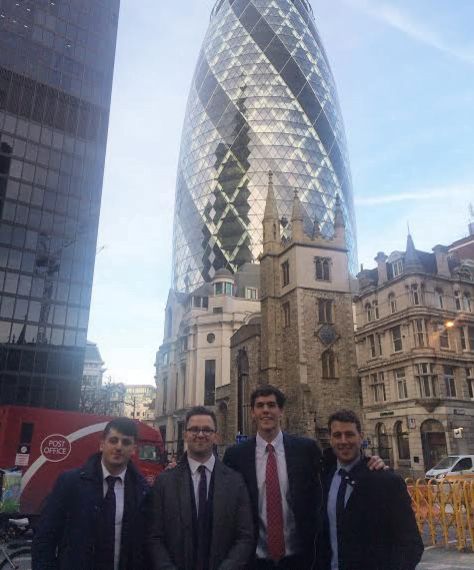 My previous blog on London was about the tours and presentations my class participated in. That was the International Business Workshop part of the trip. This blog is about the things outside of the workshop.

This was the first time my course has gotten together since exams ended on December 17th.  It was good to catch up with everyone and hear about each other’s break. Last semester, my classmates and I were in 22 hours a week of the same classes together plus time together spent outside the classroom working on group projects and studying, so naturally we’ve formed a close relationship. One of reasons the trip to London was so great was because I got to spend it with my classmates.

Our days were busy with the tours and presentations but we had free time to ourselves. We used this time to go out and explore the city. This was my first time in London and it was amazing to see. I’ve been to New York City about 10 times and I love traveling to big cities. New York City and London are prestigious for their financial sectors and it is cool to have experienced both.  Almost all of my classmates had been to London before and they would make jokes about me taking so many pictures of the city.  They tried to be funny and act as a “tour guide” for me. We passed a bridge called, “The Queen’s Bridge” and my friend beside me says, “They call that bridge the Queen’s Bridge because the Queen built it by herself. Stone by stone. Took her 20 years.” The trip was hilarious with them and I am thankful for another amazing opportunity like this that would not have been possible without the Victory Scholar program.