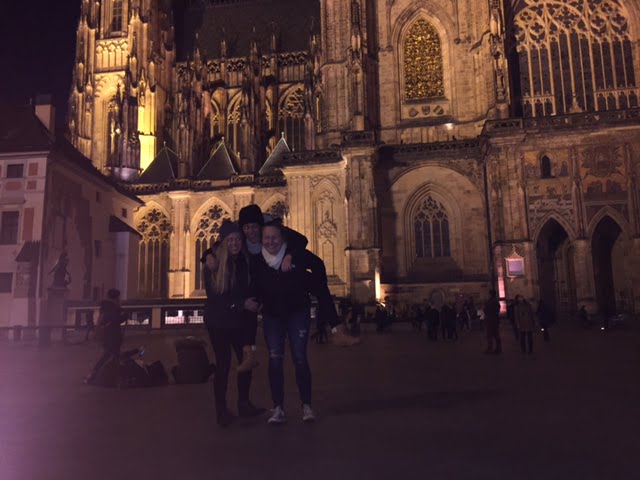 Prague was an absolutely gorgeous city. I loved walking around and just taking in the architecture of the old buildings. My favorite was probably a massive cathedral named Prague Castle. The detail in its massive Gothic façade was incredible. It was so incredible that this woman who was traveling by herself kept asking me to take pictures of her in front of it.

Now, I don’t mind doing anyone a simple favor like that; my friends and I asked countless people to do the same thing for us over the course of our travels. But this woman was something else! It took me about 10 tries to get a picture of her that she was satisfied with in front of the cathedral. Then I ran into her again at the side of the cathedral, where she asked me to be her personal photographer again. Of course I obliged, but this photo shoot was even more disastrous than the first one! The woman told me to move further, then closer, then I think on the 3rd or 4th picture I took, she looked at the result and literally said “Bleh” in my face. I was beginning to get very insecure about my picture taking abilities when I finally captured one that she approved of. Either that or she just wanted a new photographer. My friends and I walked away laughing to ourselves. Even if I don’t like a picture someone takes, I always just say “thank you” to be polite and move along, but you’ve got to admire that woman for her determination to get the perfect shot!

Aside from the picture taking shenanigans, I loved spending time in Prague. It was strange though waking up on Christmas morning in a hotel room. However, I was able to Facetime my family (despite the spotty wifi) to tell them all Merry Christmas. Thanks to technology, I still felt connected to my family despite being thousands of miles away from them. And although it was hard being away from them for the holidays, I was very thankful for the opportunity to broaden my horizons further and see a bit more of the world!